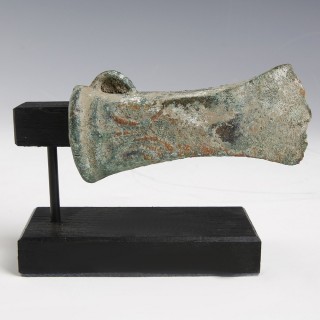 An European Bronze Age socketed axe head, decorated on both sides with a simple geometric design and featuring a corded band around the socket. The casting seam is visible above and below where the two halves have been joined.

Fine, complete and intact, signs of aging and earthly encrustations to the surface. Mounted on a custom made stand.