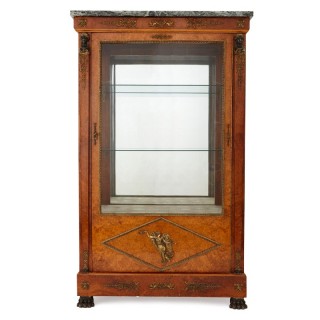 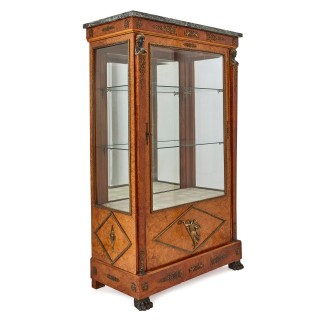 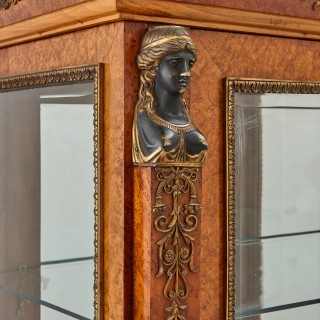 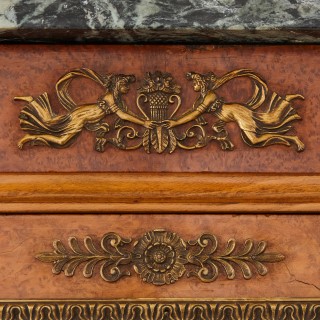 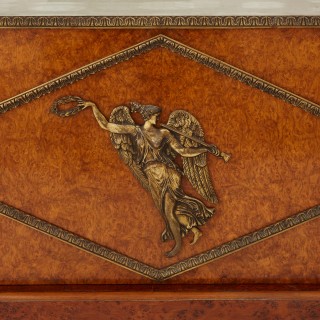 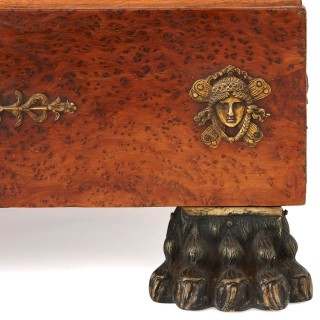 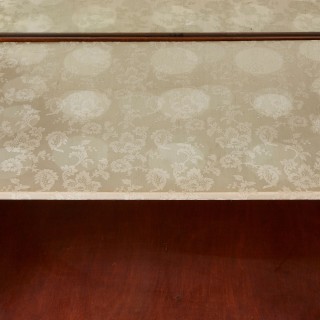 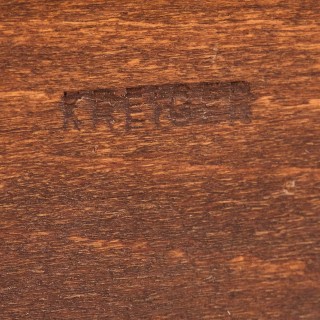 This beautiful display cabinet was crafted by the prestigious furniture company, Maison Krieger. The firm was founded in 1826 by Antoine Krieger. Over the course of the 19th Century, the firm changed its name several times, but it remained within the family until the early 20th Century. The Masion Krieger was at its largest in the late 19th Century, when it covered 5 acres of Faubourg St. Antoine in Paris. The company won several awards for its furniture at the Exposition des produits de l’Industrie in 1849 and at the Universal Exhibitions of 1851 and 1855. This display cabinet is stamped ‘KRIEGER’.

The vitrine is crafted from a light brown burr-amboyna wood, and its upper section is glazed. Its rectangular body is topped by a frieze, which is decorated with gilt bronze (ormolu) figures in flight on either side of a fruit basket, scrolling foliage, and masks. This frieze is covered by a white-veined grey marble top. The cabinet body features three shelves, two of which are glass, and one covered with a light green floral damask fabric. The sides and front of the cabinet body are glazed, to enable one to see the items displayed on the shelves. The door, on the front of the body, is lockable with a key. This is flanked, on either side, by parcel gilt patinated bronze term sculptures, taking the form of female busts, atop pilasters which taper towards their bases and terminate in patinated bronze feet. A gilt bronze foliate motif tops the glass door, and gilt bronze leaf-and-dart frames surround the glass panels.

The lower section of the cabinet is decorated with gilt bronze diamond frames, enclosing a gilt bronze figure of a woman holding a laurel wreath and blowing into a horn on the front, and figures supporting fruit baskets on their heads on the sides. The cabinet body is set on a base, which is ornamented in a similar way to the frieze. The cabinet is raised up on four feet, the front two of which take the form of lion paws.