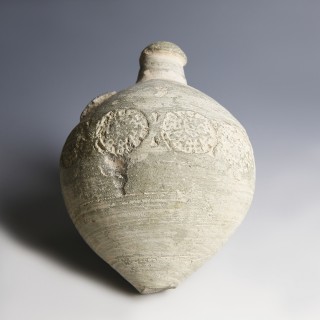 A Byzantine earthenware hand grenade featuring a hollow globular body with a pointed base. To the top, the vessel rises into a short neck with a raised collar and splays out slightly into a thick rim with a small mouth. This allowed the item to be filled with an explosive liquid known as ‘Greek fire’ and used as a hand grenade in battle. The mouth would have also accommodated a fuse to instigate the explosion. As typical for Byzantine grenades, this piece displays geometric patterns to its outer surface. A band of impressed circles feature on the body which are further enriched by radial designs and small knobs, each circle features two triangles either side. The vessel presents two irregular protuberances on opposite sides of its body, a larger one above the decorative band, and a smaller one below it.

From a collection of a North London gentleman, latterly with a London gallery.

Very good condition. Chipped point and minor dents to the body and the rim. Some earthy encrustations romain on the surface.