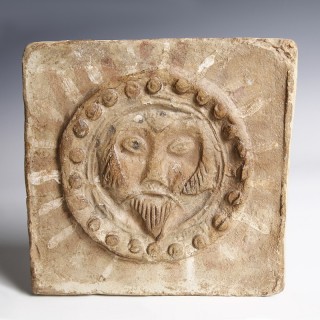 A Byzantine square terracotta tile moulded in low relief, depicting the face of Christ. The face itself constitutes a heart-shaped head, featuring a large triangular nose and almond-shaped eyes. The mouth, a deeply incised line, is framed by an inverted triangular beard, indicated by deep ridges. Hair frames the face, again indicated with the same deep ridges, and frames Christ’s hollow cheeks. A circular halo, formed from circular pellets, frames the entire facial composition. The magnificence of Christ is depicted further through the use of pigment, a series of painted white and red rays. Black pigment has been applied to the pupils and hair for further definition. Remnants of red paint can also be seen on the face, used to indicate a deep skin tone. The reverse features an indented ‘x’, possibly from the removal of the tile from its mould. A rare piece in exceptional condition.