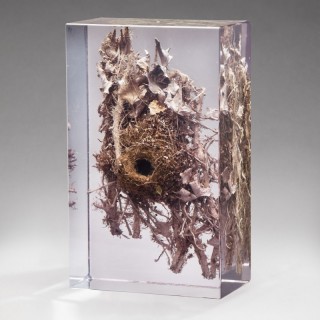 Wrens build their nests in small spaces and dense vegetation is often chosen as a suitable site. This one was constructed in a mass of tangled ivy and has been skilfully encased in protective resin, carefully built up in fine layers in order to preserve not only the delicate structure but also the natural colour of each of the carefully chosen materials.

Sasha Sykes’ work is influenced by the Irish landscape and frequently explores the cycle of life and the preservation of that fragile state often by incorporating vulnerable organic objects in hand cast resin. The caliology series, which began in response to a deep dislike of the modern worship of technology grew into a celebration of her rural surroundings and a sense of wonder at these intricate instinctual structures which are hidden all around us – she found herself experiencing the passion which had motivated caliologists through the generations.

A focus of Sasha Sykes’ work has always been to express the interaction of man with the natural environment and even in these little nests can sometimes be found not only natural materials but also the influence of man in a little piece of coloured plastic, twine or thread.

After studying architecture Sykes worked around the world including in London and New York before returning to Ireland where she now works from a straw bale studio next to her home in Carlow, south-east Ireland. As was reported in the New York Times, she continues to make sculptures ‘for people who live in the city but dream of the country’. Sasha’s work has been shown in numerous exhibitions and is held in many collections including two pieces in the National Museum of Ireland: The Wall, a screen of 2011 and The Carlow Chair of 2008.