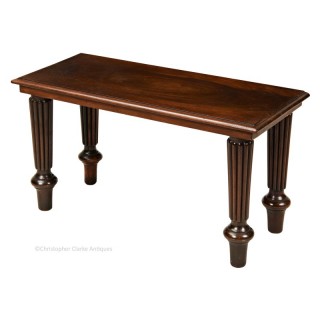 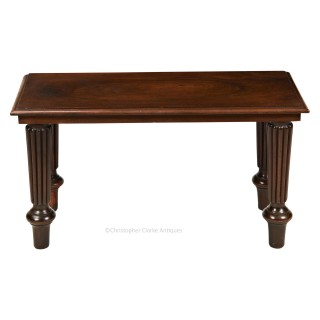 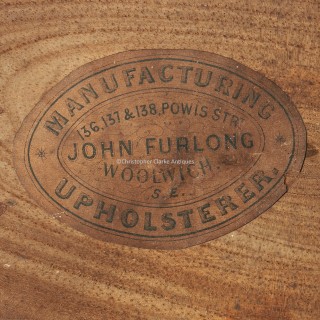 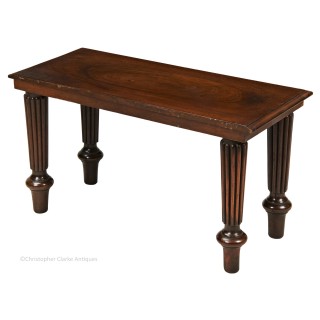 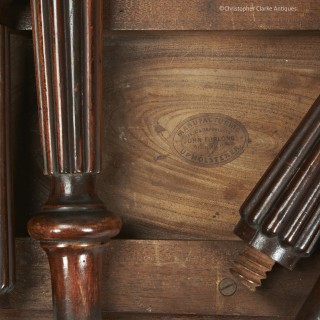 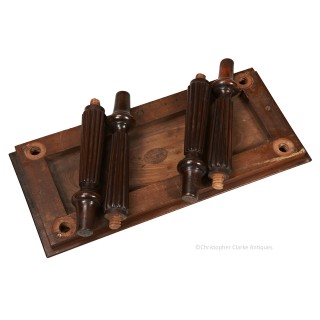 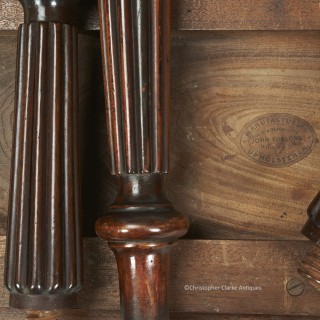 Made of mahogany, this is an unusually small, low table.

Although it would serve well as a coffee table, it is unfinished to one side as if it would stand against a wall. It’s probable that it was meant as a salesman’s sample and a scaled up version would give you a serving table. The legs look a little too big for the proportions of the table and this is not unusual for a scaled down model. They also say the most about the quality of the maker’s work so it is possible they purposely oversized them to better demonstrate the workshop’s ability. That said, it is both interesting if it is a sample and useful for its size.

The turned and reeded legs are removable on wooden threads. It’s possible that one is an early replacement or perhaps it was mixed up with one from another sample. The oval label to the underside is for the maker John Furlong, Manufacturing, Upholster of 136, 137 & 138 Powis Str. Woolwich, S.E. The address is not far from both the Royal Military Academy and the Royal Artillery Barracks. The business is believed to have been established by John Furlong in 1812. Furlong was also an auctioneer, which was not uncommon. In 1840, the business is listed at 131 Powis Street. By 1858, the business was under the names of John and James Furlong and they also had a brush turnery and coopery warehouse. The company is also listed as John Furlong & Son. The Furlongs had their fingers in a number of pies and were also estate agents, undertakers, fire and life insurance agents and removers. They were a well-established Woolwich family from the early 19th through to the 20th century when they a successful car dealership.

An interesting table by an unusual maker that could be used. Circa 1830.