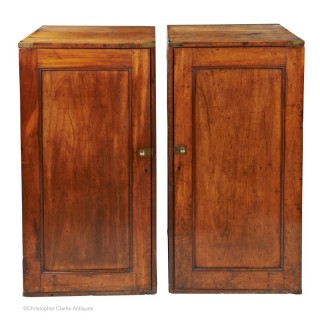 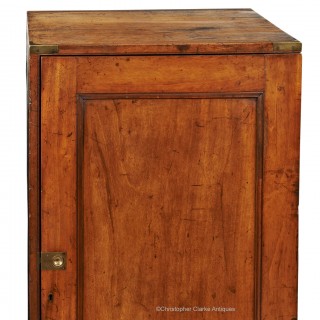 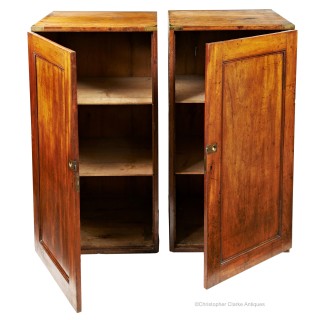 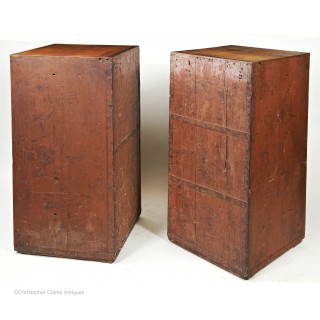 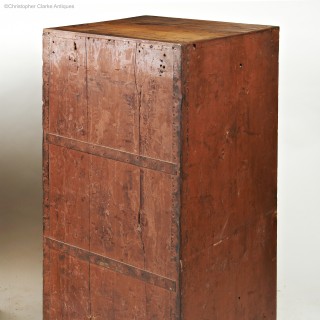 A pair of mahogany and pine Packing Case Cupboards made to house a chest during travel and to be fixed either side of it at camp.

These two Packing Cases were designed to bolt to either side of a campaign chest to extend its size. A cresting rail would then be fitted across the back of the three parts to give it a finished look. They each have two shelves, which are removable to allow the two-part chest to be packed inside.

The panelled doors and tops are mahogany with the sides and backs pine painted in a matching colour. Originally these cases would have had covers bolted over the doors and tops to add protection in transit. The bolts holes to fix these covers and to take the cresting rail have been patched out at a later date to give a smarter appearance.

The underside of one cupboard has a delivery label for R. Strahan & Co. Ltd who were both cabinet makers and warehousemen at 135 St. Stephen’s Green and Kingsbridge, Dublin. The hand written owner’s details give the name of Major R. W Doyne, Cruchton Cottage, Shrewsbury. Robert Wentworth Doyne became a 2nd Lieutenant in the 4th Oxfordshire Light Infantry in 1880, rising up to Captain. He lived at Wells House, Gorey, Co. Wexford in the early 1900s and was a Justice of the Peace before moving to England around the time of World War I. He joined the Westmorland and Cumberland militia in September 1914, leaving as a Major.

Although designed to fit either side of a campaign chest, these pedestal cupboards can of course be used separately and are a useful sized piece of furniture. The cupboards are unnamed but a few different London makers offered similar pieces. Circa 1880.