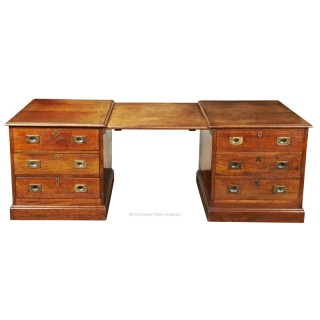 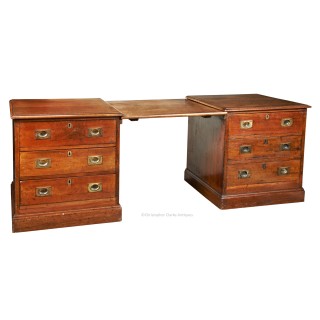 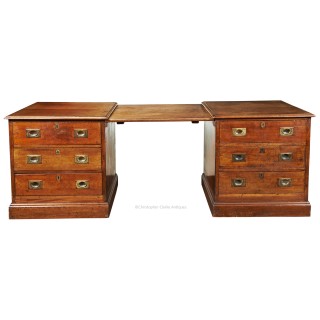 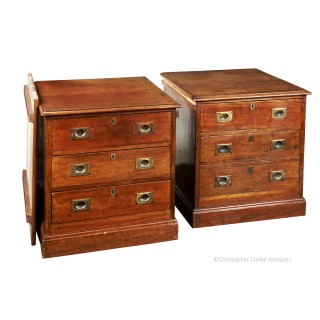 A large mahogany Campaign Desk made up of two wide pedestals with three drawers each, united by a simple board to the middle.

Given the date of the desk, it is surprising that it has a plinth base and over hanging mouldings to the top; not attributes that are common in late 19th century British campaign furniture. The central board simply rests on battens to the inside edge of each pedestal below the moulded edge. This means that the middle section of the desk is slightly lower than the pedestal tops. It does, however, allow you to use the two pedestals without the middle board as two small chests. Removing the board, naturally, also makes the desk much easier to move.

The desk has flush campaign handles to the drawers and the linings are made of mahogany. The locks are stamped Carter & Aynsley Ltd, a London hardware company who were active from the 1870s (if not before) well into the 20th century.

We can only guess who the desk was originally used by, but it may have been made for a permanent barracks where it was not intended to be moved far. The unusual proportions and design may also point to it being purpose made by an army cabinet maker. At 7 foot in length, it can be considered long but does have the versatility of being used as a desk, two small chests of drawers or a low sideboard. Circa 1900.

Good, some marks to the top through wear.