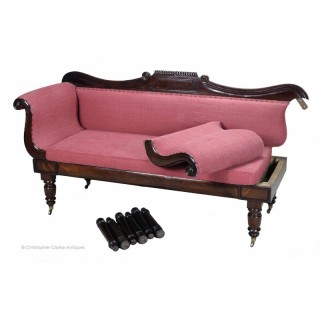 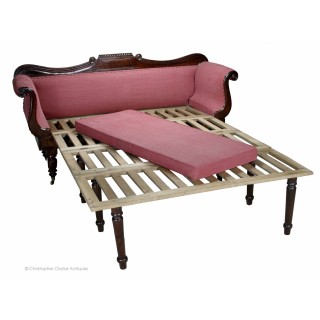 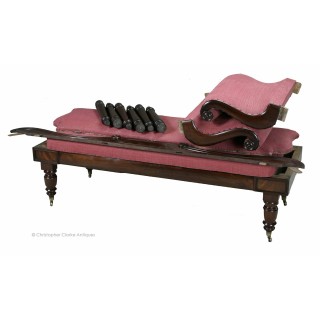 The scroll shaped arms and back are fixed to the seat by mortise and tenon joints, which obviously are not glued in place like a standard sofa. They are strong enough to hold the sections firmly in place but allow them to be removed. The show wood cresting rail to the top of the sofa also sits in place with mortise and tenon joints but has an iron strap to either end which is screwed to the back of the two arms to strengthen the sofa when set up. When the seat cushion is lifted the hinged four section bed is revealed. This lifts up and unfolds to extend out. The 3 sections that are proud of the sofa each have a pair of replaced legs that screw in to support it. The back of the sofa and the first section of the bed have bolt fittings which presumably were for fixing a canopy.

Although this sofa has no maker’s mark, it can be seen from ‘British Campaign Furniture’ by Brawer that a number of manufacturers, including Butler and Morgan & Sanders, were making similar pieces. Circa 1830.