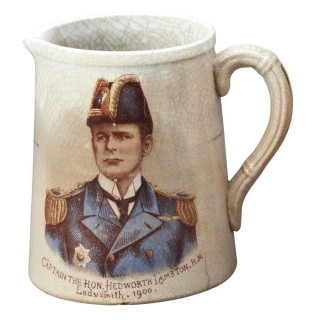 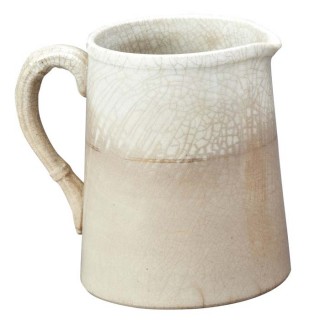 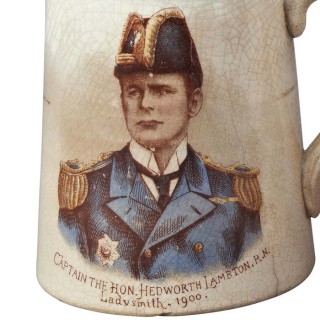 A milk or cream Jug decorated with a transfer head and shoulders portrait and legend noting Captain The Hon. Hedworth Lambton R. N. Ladysmith, 1900. In 1899, during the 2nd Boer War Lambton, on his own initiative, collected a battalion of soldiers to take to South Africa. Realising that the British at Ladysmith were desperately short of guns he also led a Naval Brigade with 6 guns to provide some ordnance for the besieged. This enabled them to keep the enemy’s heavy guns at bay and help save the garrison. Lambton was awarded Companion of the Order of The Bath shortly after and Vanity Fair published a lithograph of him titled HMS Powerful, after his ship. He was a hero of Ladysmith and much taken to by the public as this jug and the Vanity Fair print testify. Lambton served in the First World War as Commander in Chief at Portsmouth and eventually went on to become Admiral of the Fleet. There is no factory name to this jug but it looks to have been made for use rather than pure ornament. The glaze is covered in craquelure from its firing and has a faint gilt line running around the middle of its body. Circa 1900.