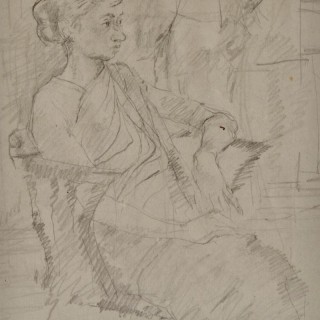 Carolyn Sergeant, 20th Century British Drawing of a Girl in a Sari

Signed on the reverse and inscribed: Set of six Drawings of a Figure from the Life – Finals
Pencil and black chalk on grey paper, unframed

In 1983 John and Carolyn bought an old run down farm house near Builth Wells in Powys, mid Wales. The house needed such extensive renovation that it took many years to complete. After their two sons had grown and left home she was able to devote more of her time to her painting, often specializing in beautifully studied still life studies.

Carolyn Sergeant, 20th Century British Drawing of a Girl in a Sari