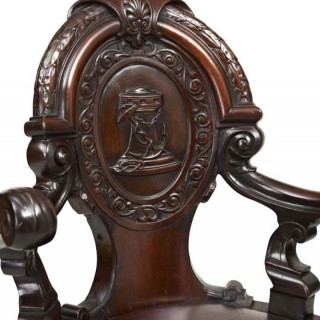 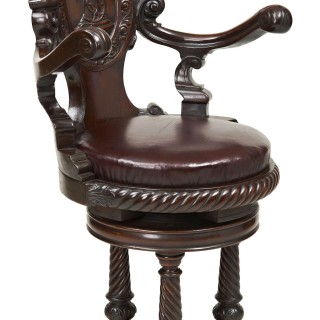 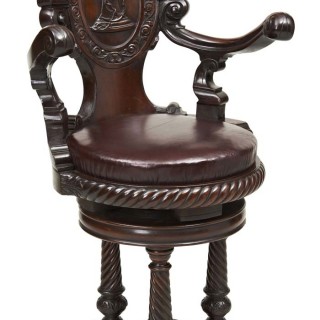 The quality of this mahogany Ship’s Chair is exceptional and it stands out from many that you see. It has strong carving with acanthus leaves to the arms, rope twists to the seat edge and leg columns. The carving to the oval back is of a fouled anchor in front of a capstan. Often such chairs will have the steamship or liner company’s coat of arms or the ship’s name. If not, they tend to be plain or have shallow carving as they were made in large numbers for the dining rooms and saloons of ships. Generic motifs of the navy are, surprisingly, more unusual. Given the work that has gone into the carving on the front this chair it is likely it was either a one off or part of a small set. The seat swivels with the iron parts made by the well-established Carron factory of Falkirk. The removable cushion is re-upholstered in dark red leather. The base is also mahogany, as opposed to the more usual iron and consists of three columns on a base with central bolt hole for fixing the chair in place. The arms have an exaggerated dip at the elbow point which is surprisingly comfortable. Overall, this is a chair that stands out. Late 19th Century.