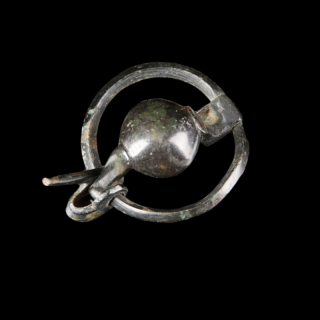 A bronze Celtiberian annular fibula consisting of a square-section outer ring with central raised body with a small dome. The fibula’s round-section hinged pin has its tip missing, however the catchplate is intact. Item is suitable for modern wear as a pendant.

The Celtiberians were a group of Celts inhabiting the central-eastern Iberian Peninsula during the final centuries BC. They were the most influential ethnic group in Iberia when Carthage and Rome began their conquests. During the Second Punic War the Celtiberians serves often as allies or mercenaries of Carthage in its conflict with Rome, and crossed the Alps in the mixed forces under Hannibal’s command.