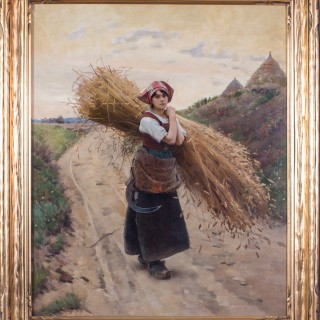 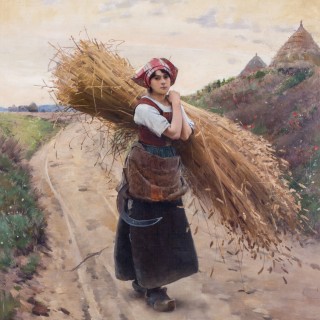 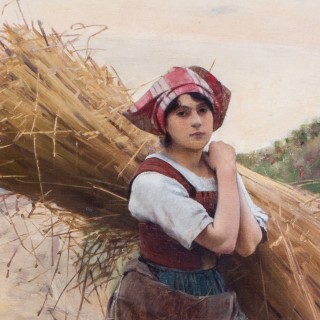 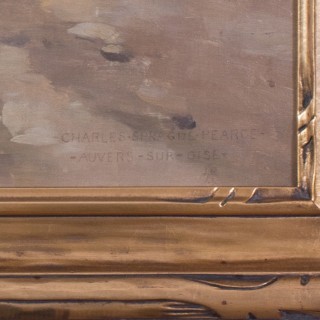 The owner of this work has had the painting in his possession for more than 40 years but it should be regarded as the “Lost Sprague Pearce”. As a young man he was conducting some photography work in a derelict building which was due for demolition. He spotted the frame poking out from behind a coal store and pulled it out. It was so covered in dirt and filth that he wasn`t sure what it was initially until he gave it a clean. Immediately he took it to the owners of the building who were happy to let him have it as payment for the work he had done for them. It is frightening to think how close this painting came to being destroyed especially as it is such a charming example from such a well regarded American painter. Charles Sprague Pearce was one of the pioneers of American painting in the late 19th Century along with Mary Cassatt, Whistler, and Daniel Ridgeway Knight. Like many of these painters, he studied in Paris and in his case enrolled in the studio of Leon Bonnat, one of the leading academic painters of the age. Though Pearce painted many orientalist subjects, biblical subjects and images of the Belle Epoque, this examplereflects his interest in peasant life from Auvers-sur-oise (where he resided from 1885). He won consistent awards and exhibited at the Salon. Over the last 20 years the interest in this artist has rocketed and this is a very good investment as it is likely he has yet to attain his full recognition.