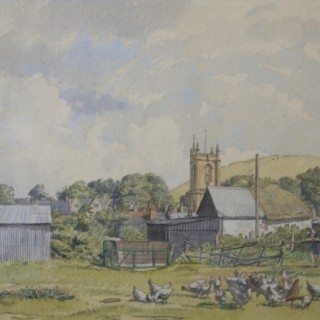 Randolph Schwabe was born in Eccles, Manchester, the son of a German born cotton merchant. He initially studied at the Royal College of Art but after a short time transferred to the Slade. In 1904 he won the Slade Scholarship and in 1905 won the college’s Summer Competition. In 1906, a Slade scholarship allowed him to study at the Academie Julian, Paris before travelling to Italy. Unable to enlist due to poor health he was an official War Artist during World War I. After the war he initially worked as a theatrical designer and book illustrator before teaching at Camberwell and Westminster Schools of Art. He then became drawing master at the Royal College of Art before succeeding Henry Tonks as Slade Professor and Head of the Slade School of Art in 1930. In 1941 he joined the committee of the War Artists’ Advisory Committee. Schwabe was a prolific exhibitor at the New English Art Club and Goupil Gallery, also showing at Carfax Gallery, Fine Art Society, Leicester Galleries and Royal Watercolour Society. Examples of his work are in the collections of the Tate Gallery, Imperial War Museum and elsewhere.

Cerne Abbas in Dorset was one of the Schwabe’s favourite places. He and his family spent much of the summer of 1937 there, recording in his diary for Saturday 31 July: “Left for Cerne Abbas … We stay at the Pitch Market, facing the Church door in Abbey Street. It is a half-timbered house, with a little 15th century caring left on it, and two 15th century fireplaces. Mrs Jarrett runs it as a ‘guest-house’. They returned to London on 20th September.