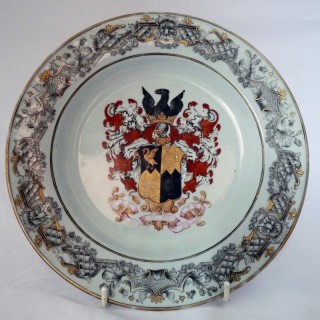 Chinese exportware Armorial plate made at the end Kangxi start of Yongzheng’s reign. Engrisaille decoration to the side with peacocks and intricate swags of border enhanced with gilt. The inside painted in overglaze enamels of orange, white, pink and grey/black with gilt. the arms are those of Johnson

The gilding is chinese gilt which is softer than European and is prone to wear which has happened just to the centre quater of the shield. This is much expected. Before decoration and during the first firing there was a small bubble burst leaving a tiny pinhole in the decoration to the centre.