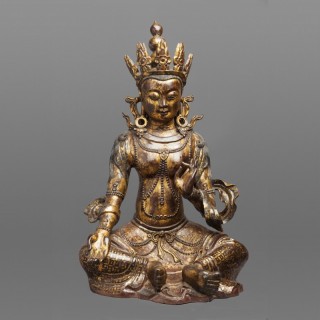 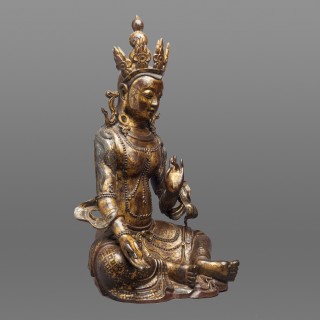 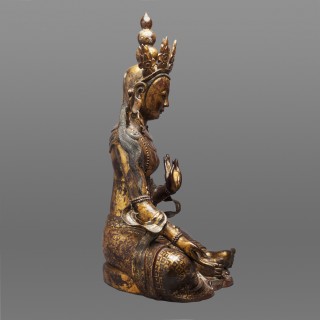 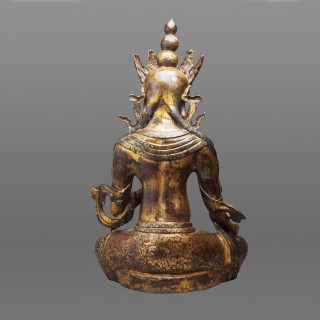 Syamatara has a serene expression and downcast eyes and is seated in a relaxed posture in a form of lalitasana (the pose of Royal ease). She wears a tiara round her chignon and the remainder of her hair is divided into two long tresses which fall over her shoulders. Her right hand is lowered in a gesture of charity or giving called varadamudra and the left is raised in vitarkamudra which is the gesture representing the communication of the teachings of Buddha. She is wearing a beautiful sari which is finely decorated with floral and geometric designs.

Syamatara is a bodhisattva, an enlightened being destined to become a Buddha but who postpones that final state in order to help humanity. She represents virtuous and enlightened action and it is said that her compassion for living beings is stronger than a mother’s love for her children. The Green Tara is depicted as youthful, composed and relaxed, she is also shown seated with legs slightly apart, ready to spring up and help rather than in the meditative padmasana or lotus position.

According to Buddhist tradition Tara was born out of the tears of compassion of the bodhisattva Avalokiteshvara who when he saw the suffering of beings he cried and his tears formed a lake from which a lotus grew – when it opened it revealed Tara (who is also his consort). Avalokiteshvara guards the world in the interval between the departure of the Buddha Gautama and the appearance of the buddha to come, Maitreya.