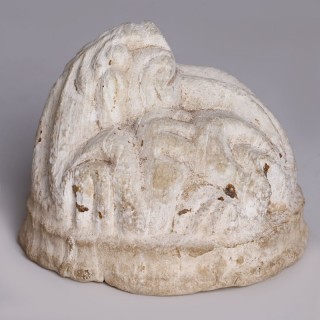 A finely carved Chinese marble paperweight in the shape of a lion dog, dating from the Han Dynasty period. The domed paperweight features a sectioned and flat depiction of the animal, whose torso is shown recumbent on wave-like element and sculpted through deep carvings in the stone. Its anatomical features, the large paws, face with wide open eyes, and large cat-like nose and cheeks are rendered in a very appealing manner, making this item a compelling expression of ancient Chinese craftsmanship.

The C. Roger Moss OBE collection. The late C. Roger Moss OBE was a renowned art collector who, throughout the years, thanks to his determination and enthusiasm, was able to create an outstanding collection of artworks, most prominently from China and the Orient, but also from other cultures.

Very fine, the marble is in excellent condition.