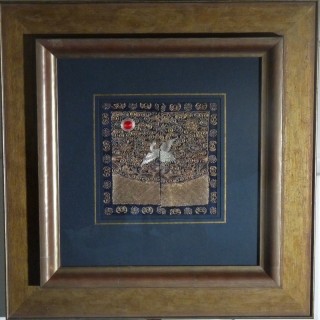 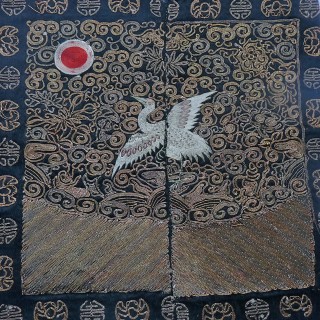 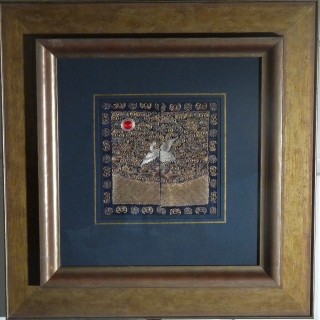 Chinese silk and gilt Mandarin Rank badge for a child to reflect his father’s rank.
it shows a sixth rank Egret from the front of a robe. it was made in two halves and has now been put together to conserve.
The badge is beautifully embroidered predominately in gilt thread with the sun disk and the bird in silk.
The badge is a small size and is rare as it has the bird as part of the badge and not appliqued on.
Children’s rank were only usually displayed towards the end of a reign as the Imperial court did not allow such badges when the Emperor could weald enough power. the badge is also intensely decorated with auspicious emblems in the gilt thread another indicator of the badge being made towards the end of a reign
A sixth rank Mandarin would have been responsible for one of the following, a secretary or Tutor at the official academies, secretary or registrar in various imperial offices, Police magistrate, Law secretary or Buddhist/Daoist Priest.
All framed and conserved

See Ladder to the Clouds by Beverly Jackson and Michael Jackson