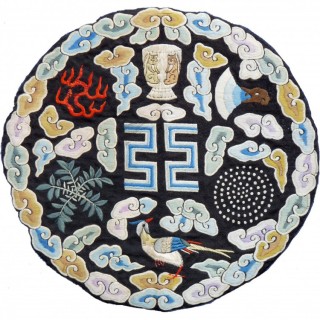 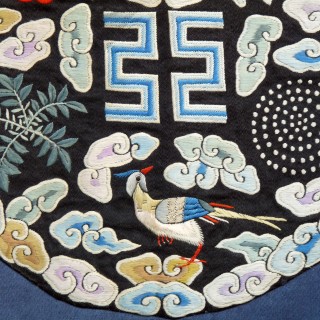 Chinese Rank badge a Seven Symbol yuan Shi kai roundel. Embroidered in silk on silk
When General Yuan Shi kai assumed the office of President after the over throw of the Imperail system he wanted to maintain some of the trappings of power and re-designed the insignia. To assume the power and the trappings of the Emperor in al but name didnot go down with the a population that had fought to get rid of the Emperor.
The badges are very rare and vey few were worn as they show the Imperial insignia.

This is a seven symbol badge with the Libation cup to the top with the leopoard and monkey on it, fire, the water weed, a plate of grain, an axe, a pheasant and shou signs.
Excellent example

See Ladder to The Clouds By Beverley Jackson and Michael Hugus p288 15.076