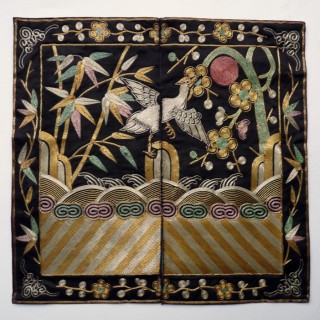 Chinese mandarin rank badge from the civil service 6th rank. The badge is of an Egret from the front of a woman’s robe.
Embroidered in couched metallic thread including gilt thread to show the bird facing a sun perched on rocks in a turbulent sea. The back ground of flowers is more a nod back towards the badges of the 18th century
The sixth rank civil servants were in positions that included tutors and secretaries at the Royal Academy, Police magistrates, Secretaries in various Imperial offices, Astronomers, priests and law secretaries.

perfect All framed and conserved