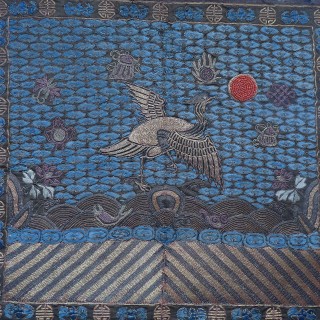 The bird is an Egret which is the sixth rank in the Chinese Civil Service and all in gilt thread.
it is perched on a rock amidst waves and a turbulent sea. The waves and sea are predominately in couched gilt thread as is the carp and some of the lotus flowers which are in and around it.
The back ground to the bird is of blue silk and gilt thread to show Ruyi headed clouds with Buddhist symbols in an arc. the sun is all coral beads in a tight circle.
the border shows bats and shou signs for fortune and luck of the wearer.
Woman were allowed to reflect the rank of their husband.
the sixth rank could be secretaries or tutors in the Imperial Academy, Sectaries or registrars in various Imperial Offices or Police magistrates. Buddhist and Taoist priests were also of the sixth rank.
All framed and conserved, the photos show the badge before framing