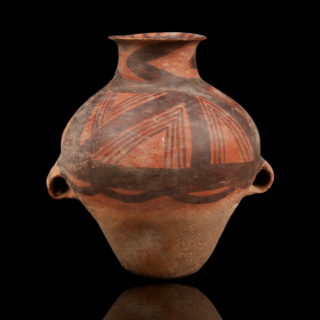 An attractive Chinese Neolithic earthenware vase dating to the Machang phase of the Majiayao, or Yangshao, culture. The vessel is of typical form, consisting of a large bulbous body, flaring neck and two strap-handles below the shoulders. Common motifs on Machang-period vases are geometric and curvilinear patterns featuring cross-hatching and triangles, circles and squares in combination. This vase largely features triangle and dot patterns in black and red slip, as well as chevron and wave motifs on the neck and body.

The Yangshao Culture was a Neolithic culture that grew along the Yellow River from the 6th millennium BC. Its artists reached their peak in the Majiayao period and produced these beautiful forms of pottery at an early period in human history. Since these artists had no knowledge of the potter’s wheel, this vase is entirely handmade. The pottery was formed by stacking coils of clay into the desired shape and smoothing the surfaces with paddles and scrapers. The first ceramics produced in China around 10 or 11 thousand years ago were wares designed primarily for use over display, and this early need for basic pottery has remained relevant during the Yangshao Culture. However,thin-walled, painted, and burnished earthenwares, some of intricate shapes, were being used as ritual vessels in various Neolithic cultures located along the Yellow and Yangtze River valleys, a possible explanation for the existence of more elaborate decorative designs.

Very fine, intact, with minor chipping to the rim and accretions over the whole. The slip is worn away in parts.