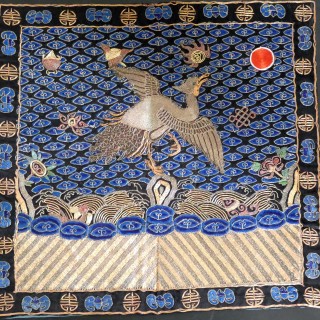 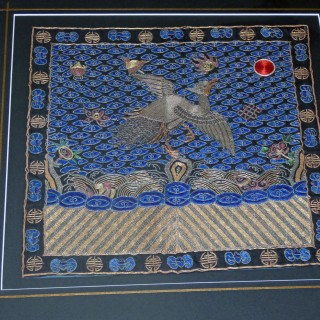 Mandarin Rank badge often called a Chinese Square with the motif of a Silver pheasant which is the fifth rank in The Chinese Civil Service. The square was from the back of a woman’s robe.
Embroidered in gilt thread and blue silk thread showing the Pheasant stood on a rock with an intensely decorated sky of ruyi headed clouds and Buddhist emblems.
The sea around and below the pheasant shows a turbulent sea with ruyi headed waves and a stripy effect to demonstrate depth.
The sun disk is made up of tightly wound circle of red thread.
The fifth ranked official could have been responsible for salt distribution or they were deputy supervisors of Instruction in Imperial and Hanlin Institutions, or Sub prefects or Librarians.
All mounted and conserved