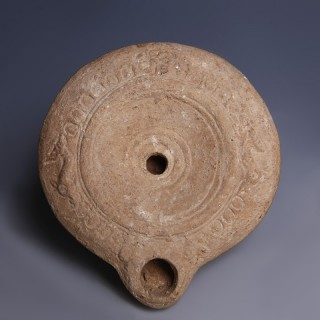 A fine Loeschcke type VIII Ancient Roman oil lamp featuring a round flat body with a sunken discus and wide rounded shoulders. The lamp is further characterised by a short and rounded nozzle, a feature developed around the second half of the 1st century AD and seen mainly in Mediterranean countries. A pattern of rounded tongues radiates outwards from the edge of the discus, ending into a circle and dot design at each side of the nozzle. Two dolphins separated by a rosette further enrich the shoulders. The discus displays a simple geometrical decoration comprising two concentric circles around the small filling-hole and to the outer edge. The flat base is marked by an imitation base-ring with a potter’s mark, reading H and N.