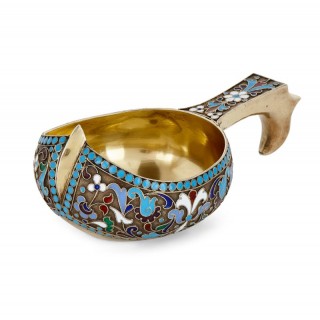 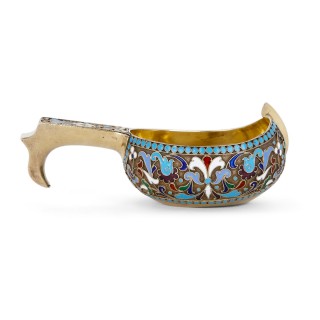 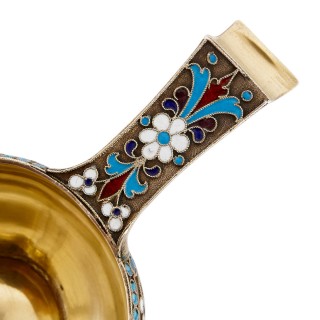 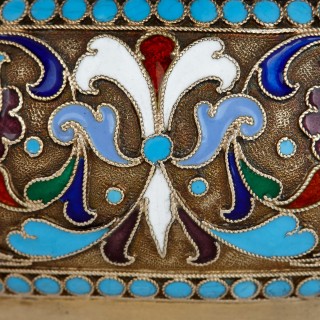 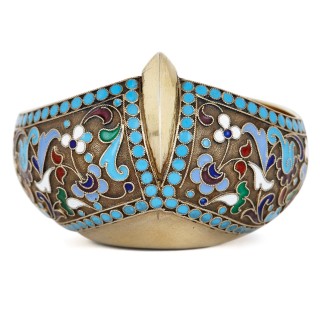 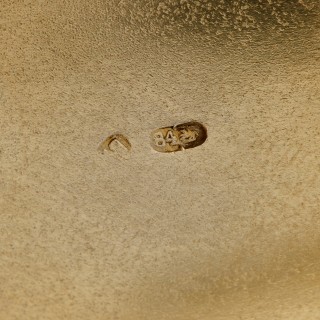 Originally produced as a functional vessel, a Kovsh is now purely ornamental—and was an ornament, a device to demonstrate the skill of the artisan, during the early 20th Century when this piece was produced. This Kovsh is traditionally shaped, with a prominent prow and a blocky handle mounted to the rear. Formed of solid 87.5% silver, the Kovsh is abundantly silver-gilt, as is especially evident on the surface of the interior and on any prominences of exposed silver on the exterior surface, such as the cloison wire and the sides of the handle.

The exterior of the Kovsh is remarkable for the beauty of the cloisonné enamel that ornaments its surface. This enamelwork is formed into scrolling foliate patterns, coloured with striking shades of red, light blue, and lilac, among many other colours. This form of decoration is what distinguishes late 19th and early 20th Century Russian enamel and silver pieces, and what makes these pieces so desirable. This Kovsh is a particularly fine example of this type of work.

The underside of the Kovsh is marked ‘84’, which attests to the 87.5% purity of the silver. There is also an additional illegible mark, which most likely indicates the maker.