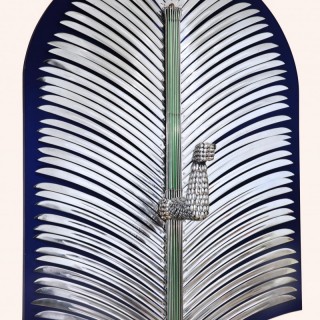 COLDSTREAM GUARDS REGIMENTAL TROPHY FROM THE BATTLE OF WATERLOO

This victory palm leaf displays arms taken from the field of Waterloo and is constructed from 76 British 1796 pattern light cavalry sabre blades forming a palm frond, the top of the leaf is formed from 4 Infantry Officer’s sword tips and a French spontoon blade. The central stem of the leaf is covered in 21 Brown Bess musket ramrods bearing a large projecting arm which has been encased in flintlock pistol butt caps. Many of the sabres have cuts and chips along the blade, damage caused in combat with French cavalry during the Battle. Most of the blades that make up the palm leaf were produced in Birmingham factories and the makers include Osborne and Gunby, Thomas Craven and T Gill, interestingly two blades are of the Officer’s type with the Royal coat of arms etched on the unseen side of the blade.
This historic Trophy of Arms hung for many years in the Officer’s Mess of the Coldstream Guards and held the Regimental Colours.

The Coldstream Guards form part of the Brigade of Her Majesty’s Foot Guards in the Household Division and are the oldest Regiment in the British Army with continuous active service. The Regiment were first formed as part of Cromwell’s New Model Army on 23rd August 1650 in the village of Coldstream and were known as ‘Moncks Regiment of Foot’.

The Coldstream have served with distinction in almost every campaign fought by the British Army: from Portugal and Spain under the Duke of Wellington, to the Crimean war, both World Wars and the recent conflicts in Iraq and Afghanistan but their finest hour was at the Battle of Waterloo, fought on Sunday June 18th 1815 near the village of Waterloo in the Netherlands – present day Belgium.

During the waterloo campaign it was the 2nd Battalion of the Coldstream Guards that fought. The Regiment was brigaded with the 2nd Battalion of the 3rd Foot Guards in the 2nd Brigade of guards. On June 16th the Light companies of the Coldstream Guards had seen action at Quatre Bras and two days later under the command of Lieutenant Colonel James Macdonnell defended the chateau of Hougoumont on Wellington’s right flank. Colonel Macdonnell enjoyed a formidable reputation in the army; when Wellington’s Prussian liaison Officer, Phillip von Muffling, questioned the Duke about the weak position of Hougoumont Wellington simply replied, “Ah, you do not know Macdonnell”. Early on the morning of the 18th Wellington rode over to Hougoumont to tell Macdonnell that he might expect to be attacked and to “defend the post to the last extremity”. To aid in the vital defence of the chateau three companies of Hanoverian Jagers, a battalion of the 2nd Nassau Regiment and two light companies of the 1st Guards were sent to strengthen the position.

The assault on the chateau started with an artillery bombardment. This was followed with an attack mounted by Gen. Honore Reille’s II Corps. As the defenders advanced to meet the French they clearly heard the attackers shouting, “L’Empereur recompensera le premier qui avencera!” or “The Emperior will reward the first to go forward!” At the almost face to face fighting for Hougoumont muskets firing a soft lead .76in ball and weighing just over an ounce were lethal. The French attacks during the day seem to have come in rushes interspersed with periods of continuous firing. In one attack a tall and powerful French Officer Lieut. Legros of the 1er Leger known as “L’enfonceur” (the smasher) hacked open the chateau’s north gates with a pioneers axe and with a party of 30-40 men charged into the farmyard. In the furious hand to hand fight Colonel Macdonnell ran across the yard calling for men to help him. Upon reaching the open north gate Macdonnell aided by Coldstream Guardsman Corpl. James Graham heaved the gate closed just as more French soldiers arrived outside. One of those French soldiers climbed onto the wall and levelled his musket at Capt. Henry Wyndham of the Coldstream who was himself holding a loaded musket. Wyndham passed his musket to Corpl. Graham who had just barred the gate with a baulk of timber. The Frenchman fired and missed, Corpl. Graham did not and shot the Frenchman through the head who then fell back on top of his comrades on the other side of the wall.

Now the north gate had been closed the French inside the farmyard were quickly hunted down and killed, including the brave Lieut. Legros. It was said only a young drummer survived. As the day wore on ammunition began to run low and the chateau was set on fire but still the defenders held on tying up the whole of Reille’s corps, some 15,000 men. When night fell the exhausted and smoke blackened survivors of the defence of Hougoumont were ordered to join the rest of the allies in the pursuit of Napoleon’s retiring army. The importance of the retention of Hougoumont by the Guards and in securing Wellington’s right flank was undoubted. Later that evening Wellington was heard to remark to the Prussian Von Muffling, “You see, Macdonnell has held Hougoumont”. He later stated that, “The success of the battle…turned upon the closing of the gates of Hougoumont”.

The crucial defence of the chateau is to this day commemorated in the ceremony of “Hanging the Brick”, held annually in the Sergeants’ Mess of the Coldstream.

COLDSTREAM GUARDS REGIMENTAL TROPHY FROM THE BATTLE OF WATERLOO