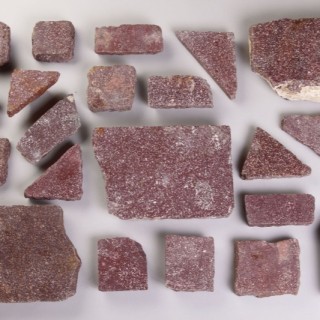 Ex Private collection of the late Professor of Archaeology Livinius Decousemaeker, Bruges, Belgium who worked at Ostia in early 1920’s
Thence by descent

Harbours were of greater magnificence and boldness of construction than many of the bridges and aqueducts built by the Romans. Hirt (Lehre Von Den Gebäuden pg 367) remarked of Ostia … ‘that even the splendour of Nero’s golden house dwindles into nothing compared with the harbour of Ostia … all built by Claudius. In their waterworks the ancients seem to have surpassed themselves’.
The harbour of Ostia was originally built at the mouth of the Tiber by Ancus Martius, but by the end of the Republic was entirely covered with sand. An artificial island formed a breakwater in front of the large piers of the harbour and carried a lighthouse almost equal in size to the celebrated Pharus in the harbour of Alexandria. This was restored by the Emperor Claudius using chalk, mortar and Puzzuolan clay, sinking three enormous pillars into the sea on top of the huge shipwreck of the vessel that had once brought the Vatican obelisk to Italy. The outer harbour was built into the sea, and the basin enclosed by freestone walls, both connected by means of artificial canals and to the open sea by the Tiber. A coin struck in 103 A.D shows a view of Ostia with large warehouses around the harbour walls, and a Pompeian wall painting shows these walls crowned by towers protecting and guarding the harbour.