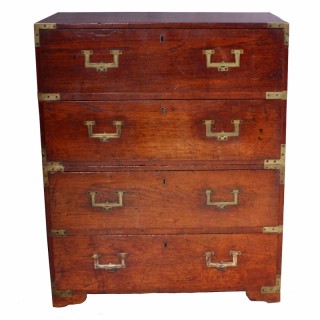 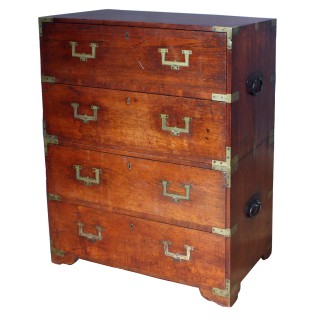 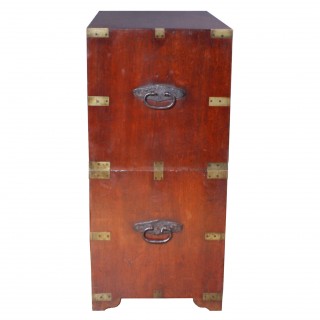 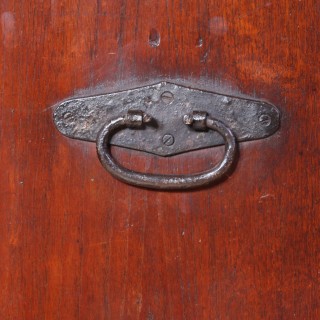 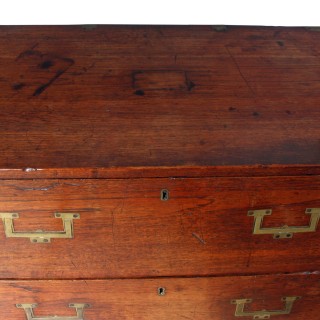 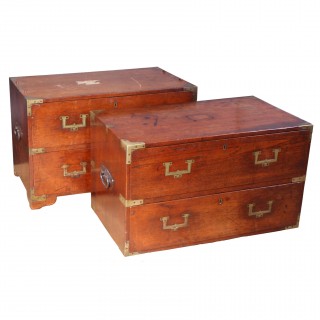 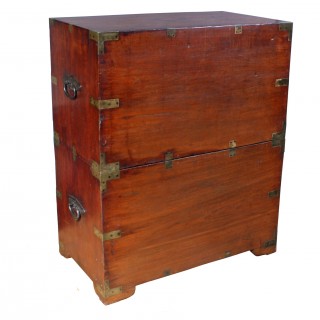 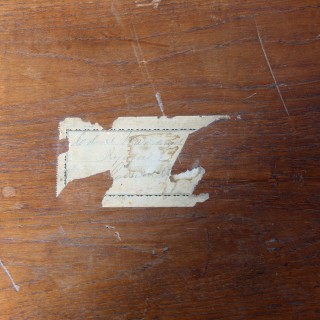 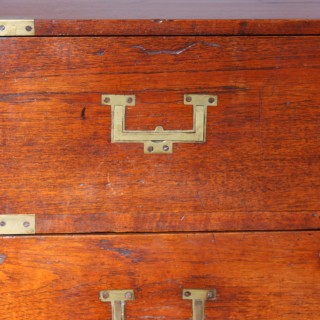 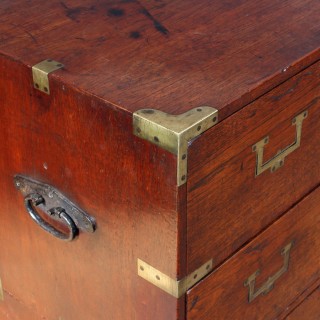 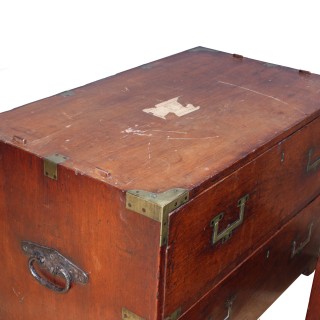 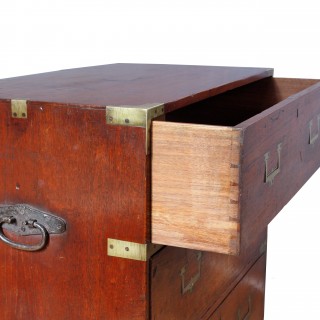 The cabinet work and quality of the brass ware of this teak Anglo Indian Campaign Chest suggests it was made by a Chinese cabinet maker working in India. The brass strap work is a little wider than standard, as are the skeletal bale handles, and the one piece brass corner plates are worthy of note. The chest has iron carrying handles to the sides, as you would expect, but the stretched out lozenge shaped back plates are a little unusual. The two parts of the chest link to each other on four rectangular lugs and it sits on bracket feet. Originally the chest had an owner’s name plate to the top which has been removed leaving a shadow line. The top of the bottom section of the chest does have a paper label to it though noting the name Col. Warrand and the address of Ryefield House. Ryefield House is near Dingwall in the Highlands of Scotland. It is possible that this Chest was used by 3 generations of Warrands, all bearing the first name Alexander. The chest was probably bought in India by either the grandfather who was in the Madras Light Cavalry or the son who was born in Bangalore in 1834. The son purchased the rank of Ensign in the 35th Royal Sussex Foot in 1853 and then his Lieutenancy in 1854. He resigned his commission in 1858, which was the year he married Georgiana Caton in Aberdeen. He became a farmer and lived at Ryefield House where he and his wife started a family. The son joined the local militia, whilst he farmed, moving up through the ranks until he eventually became the Colonel of the 1st Volunteer Battalion of the Seaforth Highlanders. The grandson was born in 1860 and joined the 72nd Duke of Albany’s Own Highlanders in 1880 as a 2nd Lieutenant. Two years later he took part in the Egyptian Campaign and fought at The Battle of Tel-El-Kebir. In 1881, the 72nd amalgamated with the 78th to become Seaforth Highlanders. By 1889 the grandson was a Captain and eventually went on to succeed his father as the Colonel of the Regiment’s Volunteer Battalion. Aside from the connection to the Warrand family, this is an interesting chest and of good proportions. It has the useful, small size typical of Anglo Indian Chests but is a little deeper than most. Early to Mid 19th Century.