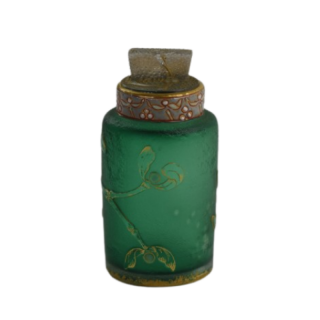 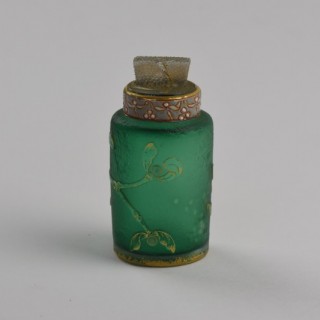 Daum Flacon decorated with Mistletoe leaves and berries. Acid etched and enamelled to the cylindrical body and with a very decorative collar showing mistletoe against a cream background. The top of the flacon is also decorated with mistletoe berries and leaves. Signed to the underside in gold enamel Daum Nancy and wit the Cross of Lorraine. Made in France c 1896-1898 and in excellent original condition. Approximate height 7.5 cm including stopper
History
The Daum Glassworks was established in Nancy, France in 1875 and is still making glass today albeit of a very different style. The family were originally Lawyers not glassmakers. Jean Daum the father of Antonin and Auguste originally took over the glassworks as part payment of a debt. Auguste (also a lawyer) joined his Father shortly afterwards and started to develop and expand the business. Auguste and Antonin and later Michel were the main family members involved in the major development of the Company. The Company employed major designers including Jacques Gruber, Amalric Walter, Henri Bergé, and in more recent times Philippe Stark and Salvador Dali. They developed and patented many techniques in glassmaking and were always at the forefront of design and manufacturing. In 1900 at the Exposition Universelle they were awarded a Grand Prix medal and quickly became one of the major makers in the Art Nouveau movement. During the Art Deco period the factory produced characteristically distinguished glass. Thick-walled vessels in vivid colours with moulded stylized designs were a specialty. Once again they were at the forefront of design innovation and employed the worlds leading designers. Styles changed again after the Second World War and the factory turned to heavy colorless lead crystal shaped into figures and vessels. Their lead crystal glass was very high quality, and their art glass emphasized the flowing qualities of clear glass. Generally, they did not incorporate cutting, engraving, or any other form of surface decoration. This kind of glass was popular for some 25 years, until the 1970s.
In 1965 another generation of Daum’s took over, and in 1970 took the bold step of reintroducing pate-de-verre. They invited several famous sculptors, designers, and master glass artists, to design special limited editions for the company. Salvador Dali was the first, Cesar the second, and the series has been an outstanding success. The company is still successful today, operating since 1962 as a public company under the name Cristallerie Daum. 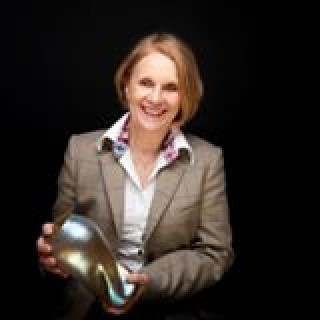