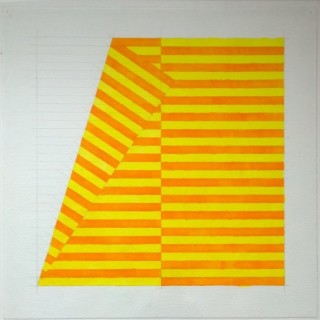 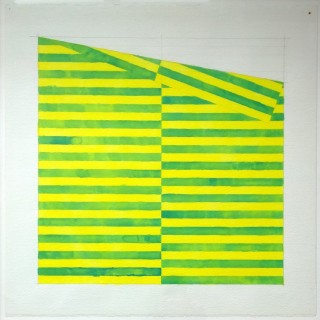 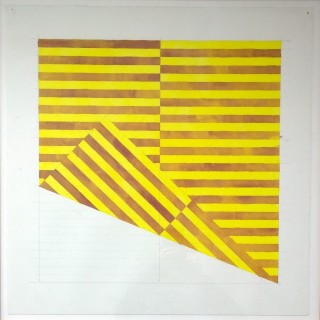 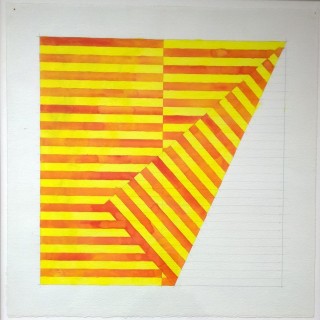 Watercolour and pencil, c.1989.
The artist recalls painting these in 1989 when approached by an art agent who was putting together the Conoco Collection. Batchelor says that they were some of his first experiments with folding abstracts and colour, other than the paintings done for Conoco at the time very few drawings and watercolours like this left his studio.

One of David’s most recent works was the roof lights of the newly restored Hayward Gallery ’60 Minute Spectrum’ 2017, as the title implies the installation changes colour throughout an hour cycle.

David Batchelor studied Fine Art at Trent Polytechnic, Nottingham (1975–8), and Cultural Theory at the Centre for Contemporary Cultural Studies, Birmingham University (1978–80). He has exhibited widely in the UK, continental Europe, the United States and Latin America; written two books, Minimalism (1997) and Chromophobia (2000), is the editor of Colour (2008) and contributed to a number of journals including Artscribe, Freize magazine, and Artforum. David was a member of Tate Britain Council from 2002-5, an advisory body on development and programming at Tate Britain

He has shown work internationally in many exhibitions including the British Art at SNGMA in Edinburgh, Days Like These: Tate Triennial of Contemporary Art at Tate Britain, the 26th Sau Paulo Biennale, Extreme Abstraction at the Albright-Knox Art Gallery in Buffalo, the Folkestone Triennial in Folkstone and Color Chart: Reinventing Color, 1950 to Today at the Museum of Modern Art, New York and Tate Liverpool.

His work is all about light, reflected urban light, grids of colour, giving the viewer a new perspective on colour and reflection.