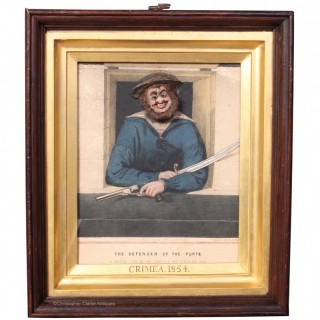 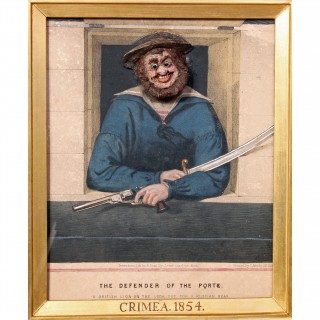 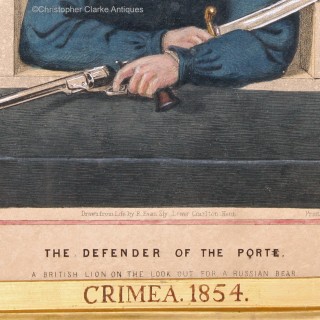 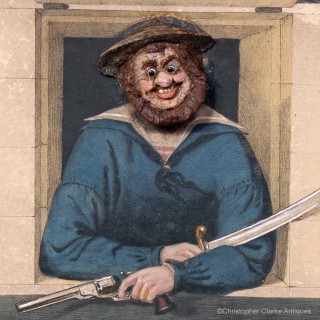 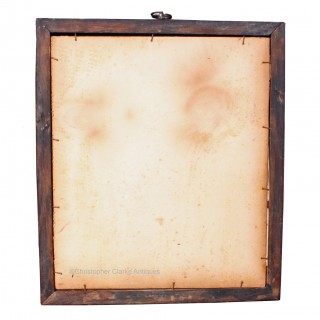 A framed, hand coloured lithographic print with a 3 dimensional face of a British sailor armed with a cutlass and a Navy Colt.

The full title of this unusual print is ‘The Defender Of The Porte, A British Lion On The Lookout For A Russian Bear’, with ‘Crimea 1854′ written to the frame’s gilt slip. The e of Porte has 2 lines drawn through it as if in correction. The print also notes it was ”Drawn from Life by R. Evan. Sly Lower Charlton. Kent.’ and ‘Printed by C. Moody 257 Holborn’. The picture stands out for its sculptured face with glass eyes. We showed a similar print of a soldier by R. Evan and printed by Moody, entitled ‘Quiet Lodgings; A First Night In The Crimea’, in our catalogue The Sundowners.

The artist and publisher, Evan, also produced a series of New & Amusing Mechanical prints made with a wheel to the back which, when turned, would alter the picture to give the subjects a different facial expression etc. The Village School Mistress, Garrick and Hogarth, or the Artist Puzzled and the Charming Young Sentinel are 3 of the prints in the series.

Evan seemed interested in pushing the boundaries of print making and inventing new ways to make his stand out from the hundreds by other publishers. This lithograph certainly does that and the subject matter would have appealed to patriots aroused by the war with Russia.