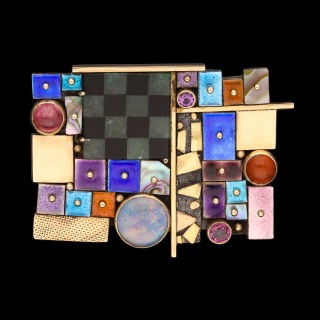 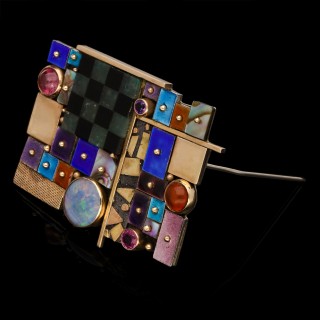 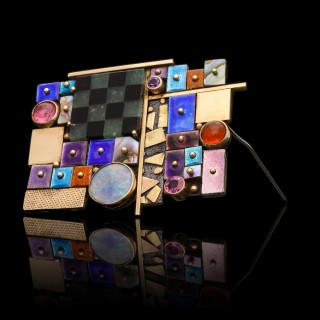 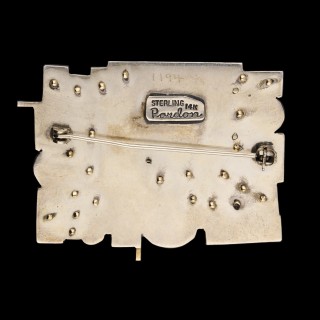 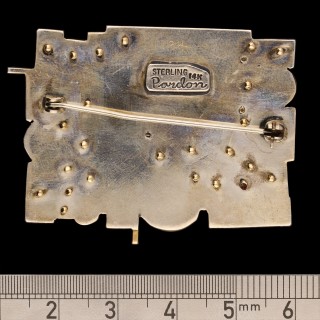 A striking multicoloured Modernist brooch by Earl Pardon c.1980s, made in silver and embellished with 14ct yellow gold and set with a wonderful mosaic-like assortment of brightly coloured enamel tiles, round gemstones in bezel settings including pinky-red garnets, orange and white opals, as well as a chequerboard of green moss agate and black onyx and beautifully iridescent pieces of mother-of-pearl, the overall effect being part miniature sculpture, part painting with an almost quilt-like effect of differently coloured and patterned elements. It is signed to the reverse and has a single pin fitting.

Directors Notes
Earl Pardon (1926 – 1991) was an American artist jeweller who was instrumental in developing the contemporary studio jewellery movement in America after World War II. He trained as a fine artist in painting and sculpture and later identified influences on his work including African tribal art, Cézanne, Picasso, and Zen paintings. He gained a B.F.A. degree in painting at the Memphis Academy of Arts in 1951, and later that same year he joined the faculty of Skidmore College, Saratoga Springs, New York. He taught at Skidmore from 1951 until the year before his death. In 1959 he was awarded an M.F.A. degree in painting from Syracuse University. Alongside his teaching he was a prolific artist working in several different media but it is his jewellery that he became best known for. The overlap in his interests informed all his artistic disciplines and you can see how the painting and sculpting influenced his style of jewellery. He frequently used enamel in his later work, ‘painting’ his jewels with bright colours and the sculptural quality to his pieces is easy to see. His work can now be found in both the Smithsonian American Art Museum and The Metropolitan Museum of Art.