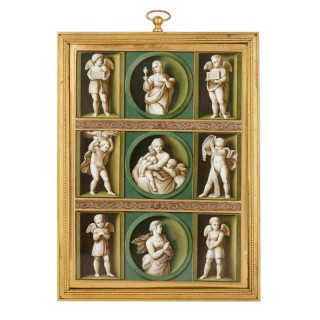 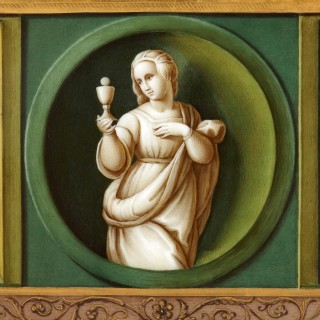 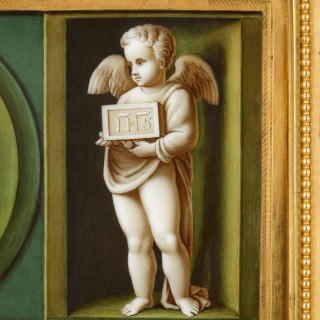 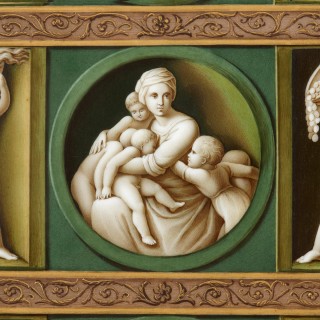 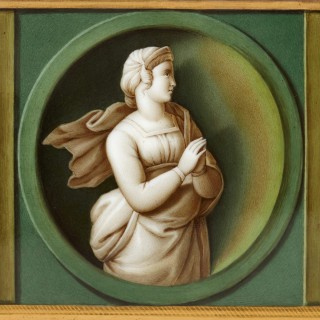 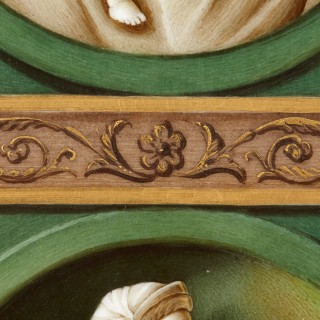 This fine porcelain plaque is decorated after part of a famous work by the Italian Renaissance artist Raphael (1483-1520). The original work, an alterpiece known as the ‘Pala Baglioni’, was commissioned by Florentine noblewoman Atalanta Baglioni.

The alterpiece comprised numerous compartments, which were later split up. The central panel depicted ‘The Entombment’, also known as ‘The Deposition’, now displayed at the Galleria Borghese in Rome. The three panels along the bottom edge of the alter, the ‘predella’, represented depictions of the Theological Virtues of Hope, Charity and Faith. It is these panels (which are now housed at The Vatican) after which this present plaque was decorated.

The plaque is formed of three sections in a vertical formation, each decorated after one of Raphael’s panels for the predella. Each section features a central roundel scene of one of the Theological Virtues, depicted as a three-quarter length female figure, flanked on either side by two full length figures of winged putti.

The uppermost section represents Hope, shown as a young woman holding a torch; the middle section shows Charity as a mother holding five children, and the lowermost section depicts Faith as a young woman in a headdress praying. All of the figures are depicted in the monochrome grisaille technique, against a green ground. The plaque is housed in a rectangular gilt bronze frame.

During the French Revolutionary Wars of the 1790s the original Raphael altarpiece was looted and taken to France. Subsequently, porcelain copies of the various compartments were made at Sevres and Paris, before the return of the works to Italy in 1815. This present porcelain panel dates from just after the wars, and it is therefore likely that it was made and decorated in France, although it could also be of Russian origin.