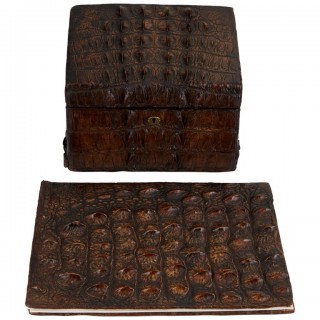 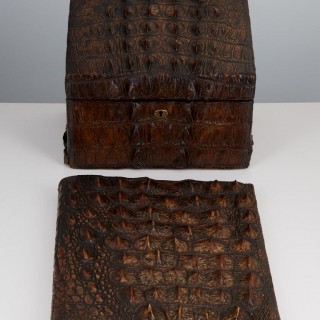 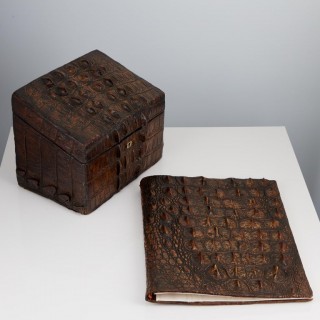 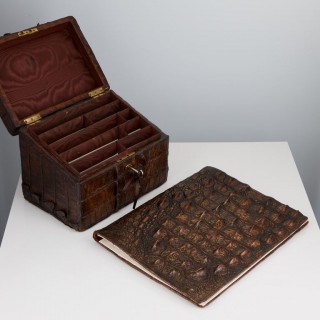 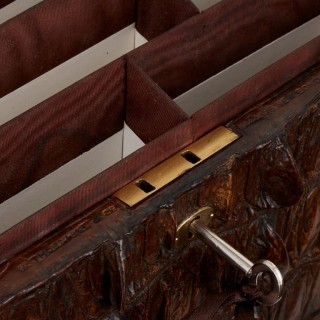 This rugged Nile crocodile set comprises two pieces as shown, one being the stationery box and the desk pad. All the skins on the two pieces are well matched. On lifting the lid of the box it reveals the sections for letters and papers. The desk pad when opened would have contained blotting paper and it has the makers mark on the box leading edge for Thornhill & Co London W1.?Also retains the original keys.

Further reading:
The company of Thornhill can be traced back to a cutler named Joseph Gibbs in 1734 based at 137 Bond street in London.By 1772 the business was in the hands of his son James Gibbs & in 1800 was renamed as Gibbs & Lewis by 1805 the business was being run by John James Thornhill & John Morley under the name of Morley & Thornhill, this partnership was dissolved in 1823 & finally became John James Thornhill & Co.
John James Thornhill died in 1848 whereby his son Walter took over the business to be known as Walter Thornhill. Walter broadened the expertise as cutlers & silversmiths by the manufacture of dressing cases, writing boxes & other luxury pieces & winning a prize medal at the international Exposition of 1855 in Paris Thornhill had already Received Royal warrants from Queen Victoria, & the Princess of Wales.
By 1875 & trading as Walter. Thornhill & Co & incorporated his son Hubert Thornhill and friend Albert Barker. Their premises expanded to 145 New Bond Street in 1878. Albert Barker left the business in 1885, and by 1895, it became a limited liability company, opening a new premises at 9 High Street, Kensington, London.
Though the business was wound up in 1905, it remained trading under the name of W. Thornhill & Co. until 1912.