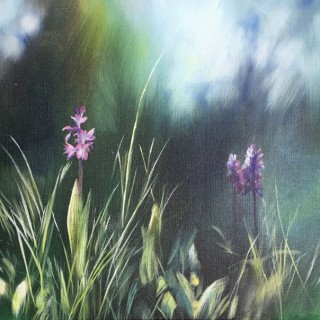 From the Artist’s studio.

Sarah is a British artist, living and working in northwest England. She received a degree in Fine Art at St Martins College (Lancaster University), and subsequently taught painting and creative drawing on their Fine Arts BA and the teacher training courses. She has been exhibiting regularly since 1985, and her work, from large abstract canvases to minutely observed paintings and drawings has always been strongly influenced by the natural environment. Recently, Sarah has gained recognition with awards such as the Towry Award for the best artist from the North of England in the National Open Art competition and is shortly to become artist in residence at Brantwood, Cumbria.

“One of the earliest influences of my work whilst growing up was that of Lake District artist and children’s author Beatrix Potter, whose botanical and entomological illustrations influenced my choice of observational drawings in my early teens. After poring over Beatrix Potter’s funguses, plants, dead mammals and birds, I then began to delve further into botanical and entomological studies.

I grew up constantly drawing. My father was a draughtsman, and my mother was an artist whose subject was primarily wild life. I was lucky enough to enjoy a rigorous arts education at school where a high value was placed upon accuracy of drawing. At school, we also closely studied composition where I eagerly learnt to use Fibonacci’s famed sequence as a method to compose my work. The way in which I lay out the subject matter in my work today still complies with the principles of this theory.

My decision to lay out my collected objects is also influenced by visits to the museum, especially entomology exhibits, as illustrated particularly by the frequent use of bees in my work. The dramatic decline in bees is an issue close to my heart; increasingly diminishing, I fear these insects will soon only be found as objects of curiosity, laid out in sterile cases.

Cutlery as a recurring motif in my work begins with my Grandmother. A cook for a large country house, my Grandmother allowed me to take old and tarnished knives and spoons thrown away by the household, starting my own cutlery collection.

From a family of collectors, my father collected blown birds eggs in the 1940s, which I have incorporated into my works. My personal collection of beetles, butterflies and bees also frequent my compositions.

In terms of artists, I find 16th and 17th still life painters, most notably Juan Sanchez Cotan fascinating, and I have been particularly inspired by his use of light and composition – though where he hangs his objects, I prefer to lay mine flat.

Like many artists and print makers using handmade linen paper, I cherish the decked edges and texture of the material, finding beauty in the paper itself. I believe it deserves to be seen and appreciated, hence my considered decision to float mount my work.

The pins in the corners of my work are my own personal nod to entomology, the scientific study which served as one of the earliest influencers of my visual language, and continues to inspire and shape my work.”