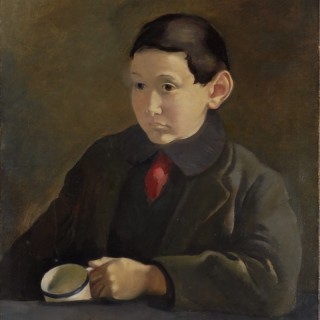 This remarkable portrait of a young boy, by Clara Klinghoffer, was painted when the artist was just 19 years old, in 1919. It is most likely that this very painting featured in a solo show of sixty works by Klinghoffer at The Redfern Gallery in that year, an exhibition that brought rave reviews.

Born in Austria, Clara Klinghoffer was brought to London as a baby and later studied at the Slade School of Art and the central School of Arts and Crafts. She exhibited at the New English Art Club and was elected to membership there in 1933. Later she lived in Holland and Belgium, and from 1939 in the United States. Her work is represented in many public collections throughout the world.