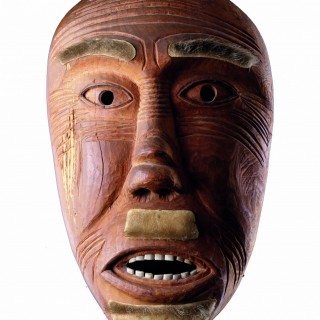 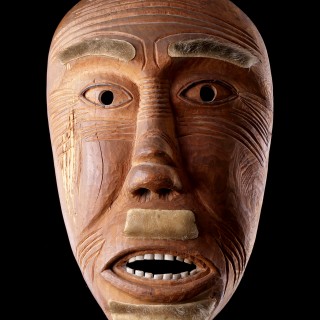 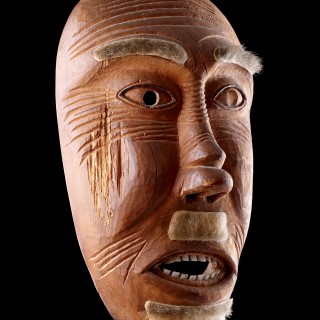 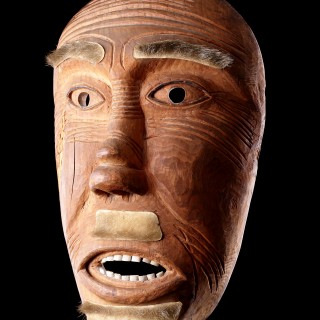 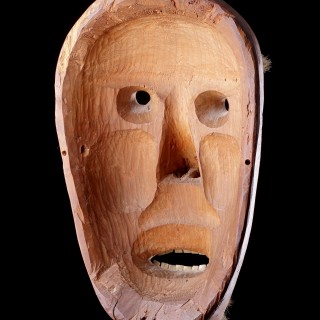 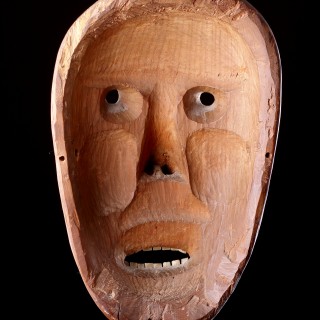 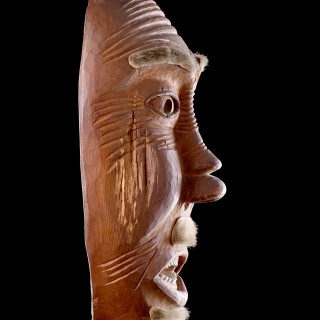 cf: National Museum of Denmark Copenhagen has a very similar driftwood mask collected by Knud Rasmussen in 1930 inv. no. L.19.175

Knud Rasmussen (1879 – 1933) was a Danish arctic explorer and ethnologist born in Greenland of an Eskimo mother. In 1902 he began 30 years of exploration and studies of the Eskimo people and their culture. He believed that Eskimo and Native North Americans shared the same ancestry having originally migrated from Asia, and he sought confirmation of his theories. In 1910 he established a Thule station at Cape York, Greenland, which became the base for seven expeditions. He explored from 1921 to 1924 some 29,000 miles of the Arctic and was the first to traverse the North West Passage by dog sled. In 1932 he went on his last expedition from Thule to South East Greenland for ethnological and archaeological evidence and it was on this expedition that this mask was collected by the team geologist Richard Bögrad.
In East Greenland among the Angakoq masks, such as this example, were used in ritual ceremonies and cult practices. They would use them to summon spirits and the mask had the power of metamorphosis helping the shaman to make contact with the ancestors and helpful spirits in the world above. The carved driftwood masks would also be worn after feasts by men in dancing and singing competitions. Sometimes these festivities would culminate with the staging of a fertility ritual known as ‘Uaajeerneq’. A masked dancer would attempt to make fun of the spectators. Distorting his voice he would often be dressed as a pregnant woman. This comedic performance was followed by a game called ‘putting out the lamps’ and a long-awaited wife swapping ritual would begin. This took place when groups from other villages and settlements visited. Sleeping with another man’s wife was seen as a spiritual act to avert misfortune, but in practice it served to prevent inbreeding.