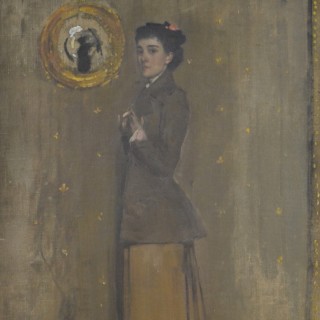 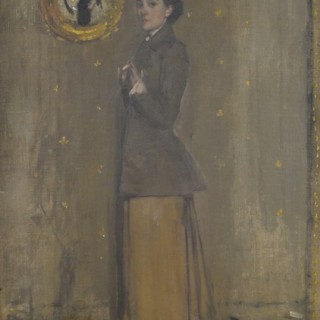 Literature:
F MacSporran, Edward Arthur Walton, Glasgow, 1987, illus.pl.37, p.50.
Edward Arthur Walton was born in Barrhead, Renfrewshire into an artistic family, his father being a competent amateur painter and photographer and three of his siblings taking up artistic pursuits. He studied at the Kunstakademie in Dusseldorf and the Glasgow School of Art. Living in Glasgow he became a close friend of Joseph Crawhall, whose sister had married Walton’s brother. Crawhall introduced him to George Henry and James Guthrie. Together, they and a group of other like-minded artists in that region, became known as the Glasgow Boys. Most had a Continental training and were developing Impressionist and Post-Impressionist painting into their own distinctive style. They were united in their passion for realism and naturalism and were influenced by the works of Jules Bastien-Lepage and James Abbott McNeill Whistler. Walton in particular was a huge admirer of Whistler and in 1884 he was a leading member of a group who petitioned Glasgow Corporation to buy Whistler’s Portrait of Thomas Carlyle. It was the first work by the master to be acquired by any public body worldwide. Walton lived in London between 1894 and 1904, living in Cheyne Walk in Chelsea, and was a neighbour of Whistler and John Lavery. Painted during his time in London, the present work is a study for Portrait of Miss Jane Aitken (private collection). In its posed long and strong profile with limited background and tones it clearly shows the influence of Whistler. The final portrait was highly regarded and was exhibited at the Glasgow Institute of Fine Arts in February 1894, no.279; Paris, Exposition Nationale des Beaux Arts, 1896, no.1235; Philadelphia, Pennsylvania Academy of Fine Arts, 1896-1897; Berlin, Eduard Schulte Gallery, 1900; Liverpool, Autumn Exhibition, 1901, no.387. The convex mirror in this study was left out of the finished portrait and the decorative motifs on the backdrop were also omitted.