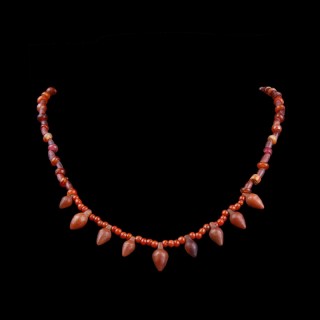 An elegant Ancient Egyptian restrung necklace with carnelian beads in varying size and nine finely carved heart amulets. The stones are in slightly varying shades, owing to the natural differences in carnelian colour, which adds a charming sense of variation to a simple necklace.

Despite the fact that the Egyptians did not have access to the medical knowledge we have today, they were aware of the importance of the heart in the functioning of the body. This led to beliefs that the heart was the source of wisdom and emotion, and heart symbolism became an important part of Egyptian culture. Perhaps most significant was its role in the ‘Weighing of the Heart’ ceremony, where the hearts of the dead were weighed against the feather of Ma’at to ascertain the purity and virtue of the deceased and decide their destination in the afterlife.

Fine, the necklace has been restrung.