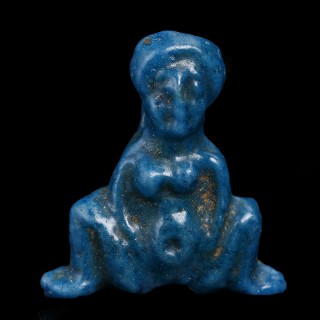 A finely modelled Ancient Egyptian blue faience amulet of the Greco-Egyptian goddess Baubo. The female deity is portrayed nude in her usual stance, squatting, with legs a part, and her hands indicating her genitals. The amulet’s reverse appears flat and unworked. The amulet has been pierced longitudinally for suspension. Representations of this type were extremely popular across different cultures in the ancient World and became also archetypes of the later Medieval compositions known as sheela-na-gigs.