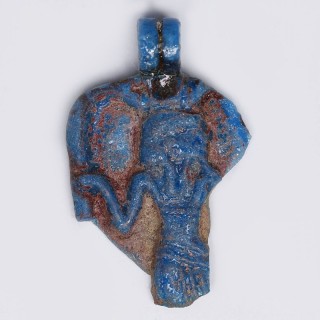 A very fine Egyptian turquoise faience fragmentary amulet of the god Heh, who the deity upon eternity and long life. Heh is depicted in his human form, which shows him in profile with his arms bent and extended outwards towards an arching palm branch. When depicted in this way, it is representative of the number one million, which to the Ancient Egyptians was synonymous with infinity. His other forms are a frog, or a man with a frog head. Details such as hair and clothing have been finely rendered and are still visible. This amulet is now incomplete, as the bottom portion is missing. The reverse remains smooth and unworked.

Damaged, with bottom half missing. Suspension loops might have been restored with artificial glue, a common practice for this kind of amulets.