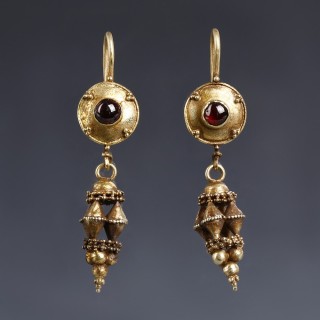 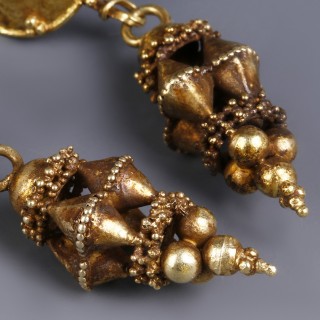 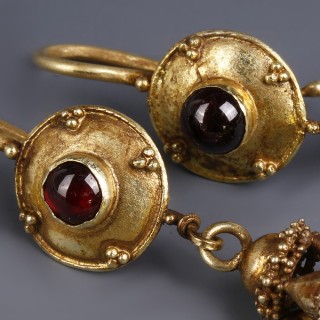 A pair of ancient Roman gold earrings composed of a central rounded boss and an elaborate hanging pendant. The central disc encases a large red garnet at its centre, with small tri-clustered granulation equally interspersed. The pendant’s main component are four diamond-shaped hollow beads, sandwiched between a dome and a grape-like cluster of spheres. Added granulation has been attached to the dome and as a layer for the diamond beads to sit upon. A simple s-hook completes the reverse.

During The Roman Empire jewellery became quickly a fundamental and essential social display of wealth. Following the spread of the Roman Empire, Roman jewellery became more and more elaborate in the designs and in the materials used. Semi-precious gemstones, such as garnet, were used to enrich and embellish earrings, rings and necklaces. In Ancient Greek and Roman mythology, Hades gave pomegranate seeds to his lover Persephone, as a token of safety, while she was leaving the underworld to join her mother Demeter in the human world. The semi-precious stone garnet, recalling the colour and the shape of the pomegranate seed, became a typical gift exchanged between separated lovers.