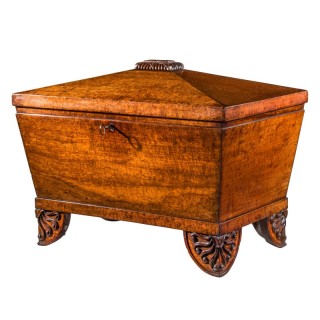 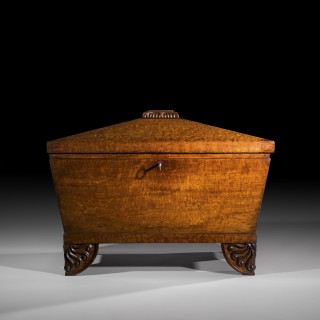 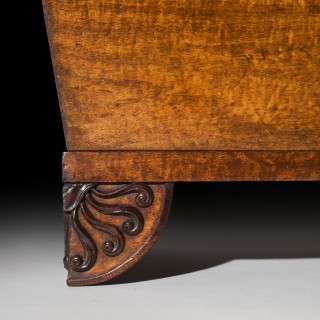 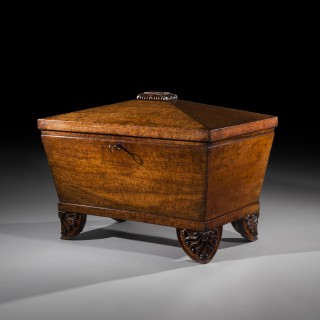 This cellarette was designed in the fashionable ‘Antiquarian’ taste, promoted by such pioneers of the Regency design as Thomas Hope and Henry Holland, being inspired by forms from classical antiquity. The form of the base corresponds to a design for a foot-stool by Thomas Hope, illustrated in his Household Furniture and Interior Decoration, 1807. A further comparable example of this design was supplied for the Boudoir at Southill and is shown in situ in F.J.B. Watson, ‘Southill: Its Furniture and Decoration’, Connoisseur, January-June, 1952, p. 16, fig. III.

Thomas Hope (1769–1831) was influential as a designer, design reformer and collector. A Dutchman, born in Amsterdam, Hope inherited from his family a tradition of collecting as well as vast wealth from the family bank. He was a collector on a grand scale and also an innovative designer of great genius who helped define what we understand as the Regency style.

His extensive Grand Tour travels in Europe, Greece, Turkey and Egypt inspired his interest in antiquities as a source of designs for Regency interiors, furniture and metalwork. He was determined to reform contemporary taste by returning architecture and the arts, including interior design and furniture, to what he conceived as the spirit of classical purity.