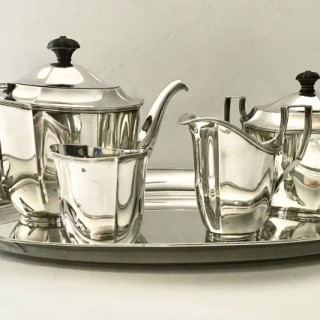 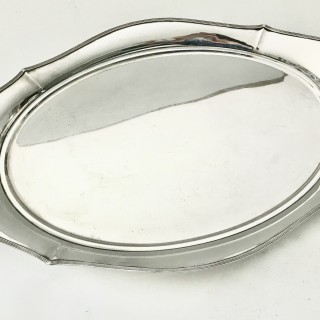 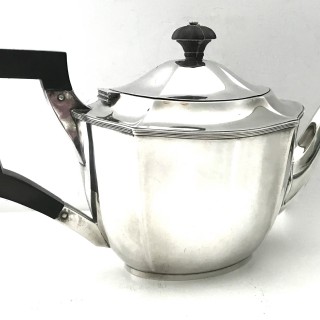 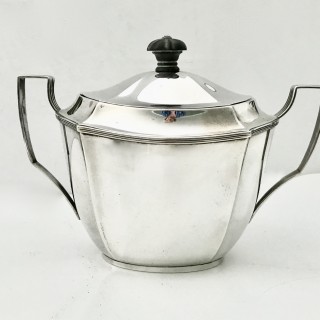 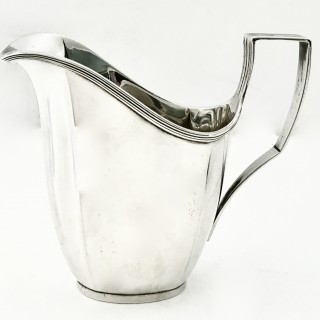 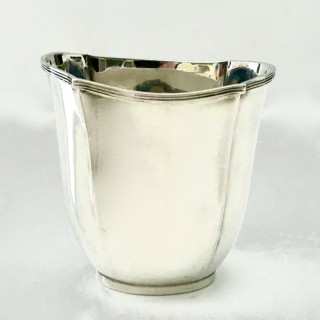 J.M. VAN KEMPEN AND SON, VOORSCHOTEN TEA SET
Dutch silversmiths. Founded 1835 by J.M. van Kempen (1814-77) in Utrecht. In 1858 they moved to Voorschoten.
The firm became the largest and oldest manufacturer of silver in the Netherlands.
Early last century, Van Kempen began to make products that are simple in form such as this tea set in contrast to the elaborate silver they made for royalty.
This set is hallmarked with the V K for the above, the Lion for 833 fineness, Minerva Head with B for Utrecht and also the retailers name of ST. ELOY of Rotterdam.
The Retail of St Eloy was founded in 1901 by Albertus Eduard Maria van der Loo (1878-1960), he was also director of N.V. Het Huis van St. Eloy, trading in jewellery and registered in Rotterdam. He and his son and successor Joost Albertus van der Loo (1907-1985) learned the jewellery trade in Germany and Switzerland.
The House of St. Eloy in the beginning till the mid seventies was a very exclusive establishment selling both high-quality jewellery and silver such as thisTea set.
Tray 47cm x 30cm
Teapot 18cm high x 28cm from end of handle to spout end
Sucrier 13cm high x 19cm wide
Milk jug 8cm high 11cn wide
Beaker 7cm high x 7.50cm wide
Total weight 66 troy ounces

Very good.
Photographing silver is very difficult because of the reflection so these images do not reflect the true beauty of this set