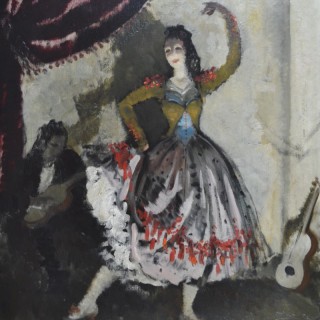 Signed and dated 1938
Oil on canvas

Born in Scotland and studied at Harrow School of Art where she won a scholarship to the Royal Academy Schools. Her first painting was shown at the Royal Academy in 1918 after which she set up a studio with her sister Anna Zinkeisen and started a career as a society portrait painter and commercial and theatrical designer.

Her lifelong association with the theatre started when she was taken up by the impresario Nigel Playfair. She became chief stage and costume designer for Charles B Cochran; designed for Noel Coward; worked at the Old Vic with Laurence Olivier, creating his make-up for the film Richard II; and wrote a key book, Designing for the Stage. Her commercial work included advertising posters for the London Underground and in 1935 she and her sister were commissioned to paint murals and a decorative scheme for the Verandah Grill, a restaurant and night-club on the liner RMS Queen Mary. They also contributed murals to the RMS Queen Elizabeth in 1940.

During World War II Zinkeisen joined the St John’s Ambulance Brigade and worked in London as a nurse during the Blitz. In 1945 she was commissioned by the War Artists Advisory Committee as a war artist and was one of the first artists to enter Belsen concentration camp, two of her paintings of it being in the collection of the Imperial War Museum. She was a fine horse women, winning the Moscow Cup for the Supreme Hack Championship at the International Horse Show in 1934.

She exhibited at the Royal Academy, Royal Society of Portrait Painters and in the United States. In Paris she won Bronze, Silver and Gold medals at the Salon. In 1929 she was elected a member of the Royal Institute of Oil Painters.