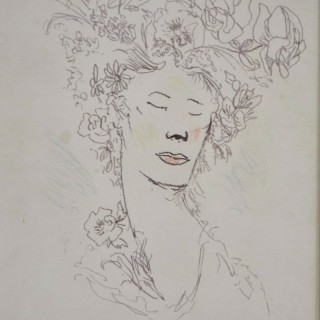 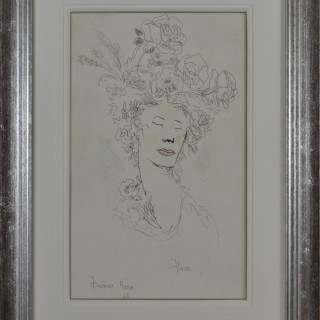 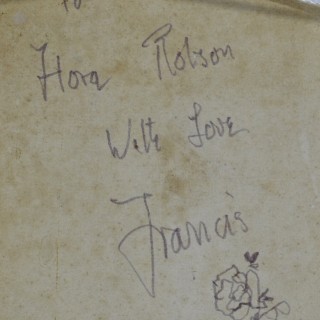 Signed, inscribed Flora and dated ’66; inscribed on a label on the backboard: To Flora Robson with love Francis
Coloured pens

Sir Francis Cyril Rose was born into wealth and privilege at Moor Park Hertfordshire and inherited his baronetcy while still a child. He began his artistic career at a very early age when he won a gold medal, aged only 13, in a London exhibition organized by Sargent and Orpen for painters under 15. Between 1929-1936 he lived in Paris where he trained under Francis Picabia and Jose Maria Sert. He held his first one-man show in Paris in 1931 and was initially employed as a set painter for Diaghilev’s Ballet Russes. Whilst in Paris he was a friend of Jean Cocteau and also occasionally collaborated in his work with another English painter, and his sometime lover, Christopher Wood. In the early 1900s he travelled with this future wife, Dorothy Carrington, to France, Italy and North Africa. In France, Rose became an intimate acquaintance of Gertrude Stein and Alice B Toklas, the former helping to launch his painting career by commissioning several of his works, most notably a portrait of herself. Rose would go on to have exhibitions of his work in Paris, London and New York. He also worked as an illustrator for a cookbook by Toklas, The Alice B Toklas Cookbook. In 1938 he achieved critical praise with his designs for Lord Berner’s ballet Cupid and Psyche at Sadler’s Wells. This success was repeated in his designs for Serge Lifar’s production of La Peri in 1946. In the early 1960’s Rose’s marriage to Dorothy Carrington failed and they divorced in 1966. Having led a life of great extravagance, he spent his final years in financial trouble being helped by his many friends, most notably Cecil Beaton. In 1961 Rose published a memoir, Saying Life. He made a brief appearance as “Lord Chaos” in Kenneth Anger’s film Lucifer Rising (1972). Rose continued to show in London and Paris throughout the 1950s and 1960s and had a major retrospective in London and Brighton in 1966.

Works by him are in the collection of the Yale University Art Gallery (Stein-Toklas collection) and the Fine Arts Museum of San Francisco.