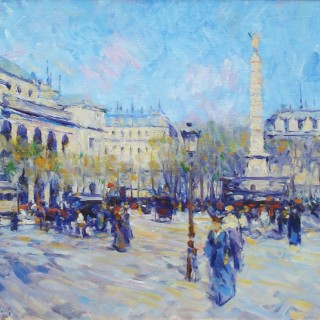 Elie Anatole Pavil was born in Odessa in the Ukraine in 1873 as Ilya Anatolevitch Pavil. In 1891 he arrived in Paris aged 18, and after a brief return to Russia, settled permanently in Montmartre in 1899, becoming a French citizen in 1911.

After studying at the Académie Julian under William-Adolphe Bouguereau, he first exhibited his paintings in Paris in 1904 at the Salon des Peintres de Paris, and thereafter continued to exhibit at various Paris Salons such as Salon des Artistes Indépendants, Salon des Artistes Français and the Salon d’Automne throughout his artistic career. His first solo exhibition was at the Galerie Bernheim in Paris in 1907, followed by three more one-man shows at the Galerie Georges Petit in 1921, 1924, and 1929, and in 1923 he exhibited at the Peinture Moderne Group III, with Picasso, Utrillo, Valadon, Van Dongen, Vlaminck etc.

He concentrated on the theme of Paris – its parks, gardens, boulevards, and the river Seine. He was made Chevalier de la Legion d’Honneur in 1930, and moved to Morocco in the same year to live with his daughter and paint. He died in Rabat in 1948.