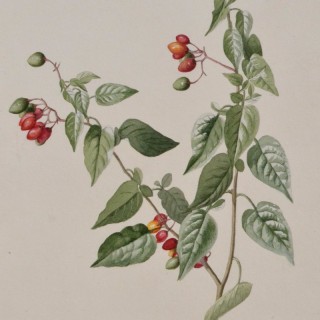 Signed with initials and dated 1881
Watercolour and pencil, unframed

Francis Martin Russell was born in Marlborough, Wiltshire. His father, John Russell, was an ironmonger, at that time not a hardware retailer but a merchant who arranged the manufacture of finished pieces from smiths, nailers and other metal workers and then organised the sale and distribution of the finished products to retailers. In this role John Russell came into contact with Sir John Guest, the great South Wales Ironmaster and Member of Parliament for Merthyr Tydfil and it was Guest who, in 1839, nominated the 19 years old Francis Martin Russell for entry to University College, London to study Medicine. Russell qualified in 1842 and in that same year took up a position as house surgeon at the Glamorgan and Monmouth Infirmary. In 1854 he left Wales and moved to Canada where he joined the Medical Faculty of Trinity College, Toronto as Professor of Botany and Medical Jurisprudence. Unfortunately, two years later, the Medical Faculty was closed and Russell returned to Wales where he resumed his medical practice as surgeon to the English Copper Company based in Cwm-Avon, Taibach, Glamorgan.

In the late 1870s, Russell retired from medicine and moved from the intense industrial frenzy of South Wales to the calm gentility of Caledonian Place, Clifton. He had more time to devote to his interest in botany and it was in Clifton that he executed many of these beautifully studied watercolours. Looking upon his subject with the eyes of a botanist, the accuracy of a surgeon and the hand of an artist, he recorded the flowers he would have seen around him and included native species as well as the more exotic plants that were becoming fashionable favourites of the Victorian gardener.