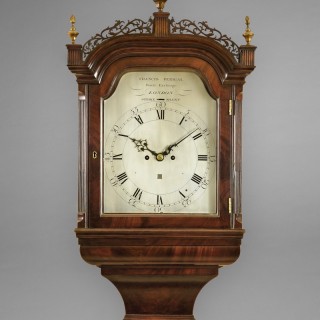 The original moulded under-curved bracket incorporates a key drawer and provides access to the pendulum bob for regulation.

The 10-inch two piece silvered brass shallow arch dial with Roman numerals and well pierced hands has an aperture above VI to view the day of the month. There is a strike/silent option above XII and the dial is signed by the maker Francis Perigal, London in the ogee arch.

* The Perigals were an eminent family of clockmakers spanning most of the 18th century. This distinctive clock, which is identical in design to those made by John Ellicott, was made by Francis Perigal who was working at the Royal Exchange until 1805.